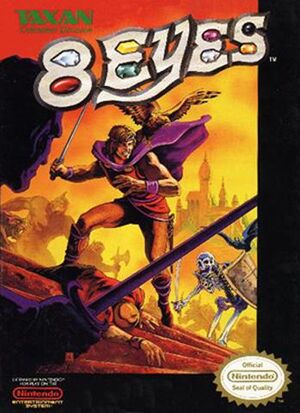 About a century after a nuclear war that nearly destroyed the Earth and it's inhabitants. One man has used special jewels known as the "8-Eyes" to bring mankind back from the brink of extinction, this man will be known as "The Great King" who will rule what is left of the world. Suddenly, the 8 Dukes to The Great King have betrayed him and sealed him away. One of The Great King's mightiest warriors named "Orin" now sets himself on a journey to defeat the rebel dukes and rescue The Great King.

You play is Orin as you choose from eight of the dukes' palaces across Europe, Africa and Asia. You use a small sword as your primary weapon and even Orin's Faclon named Cutrus. You can also use sub-weapons which you can obtain from some defeated enemies, you also can break certain blocks to receive a special item which either increases health and/or weapon energy Plus, you also receive a more powerful sword from every duke (at the end of each of the 8 stages) you defeated.

My mother found this game at my one time video game rental store, and I have also played this game as well. What I have noticed (as well as my mother) that this game played very losely to Castlevania, as the game sprite of Orin looks a lot like Simon Blemont. Just look at these sprites. 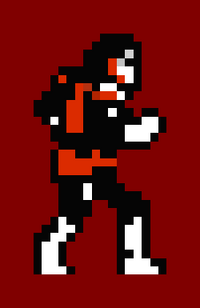 This game also has some gameplay elements from Megaman. This is because not only you choose which stage you can start at. But (as said before) you get a new sword from a duke you defeat, and it works best in a particular stage. 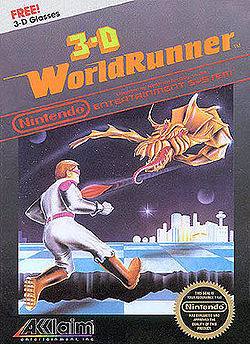 A distant star system has been over-runed by evil space creatures. The lone space warrior (known as "Jack" in Japan), must stop them.

You play as the space warrior (Jack). As you venture to 8 planets to rid them of space creatures (in particular, snake-like creatures with heads of either a dragon, tiger or a frog). You can pick up power-ups such as rockets or potions which will allow you to throw fireballs. Jack can also jump gaps and pick up baloons that can send him to bonus stages.

I also played this game on the NES. I didn't know it at first but through some study on the internet, I have learned that this game is a clone to the Sega game "Space Harrier" which has the same graphic layout and gameplay. To me, this is more (or less) a 3-D layout version of Super Mario Bros. because Jack functions similar to Mario. He jumps, shoots fireballs, the power ups are quite similar (the poison mushroom from the Japanese version of Super Mario Bros. 2 also makes an appearence and has the same function) and there's 8 worlds (with 4 segements each). 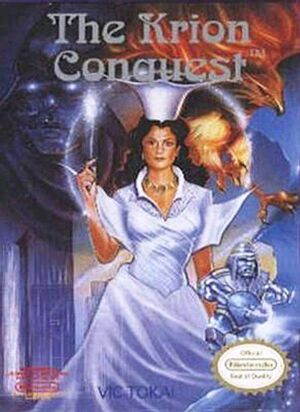 The year is 1999, and most of the world has been conquered by the robotic regime known as "The Krions". But, only one person stands in the Krions' way: The Cybernetic Witch Francecsa.

You play as Francesa as you use powers and even robotic technology to battle the Krions and bring an end to their regime. Everytime you defeat a boss, you get that boss' weapon.

As you might have already guessed, The Krion Conquest looks (and feels) a lot like the NES Megaman games. Francesa uses a magical staff-like weapon which functions a lot like Megaman's Mega Buster, and (as stated before) once Francesa defeats a boss, she'll get that boss' weapon (just like when megaman defeats a robot master). Francesca's sprite looks and feels like Megaman as well. Here they are.

Plus, once Francesca uses another weapon she changes color (like Megaman). Hey, she even has the same death fashion as the Blue Bomber as well. She *is* a cyborg after all. Now, I have never played this game, but again I did some research on the internet. 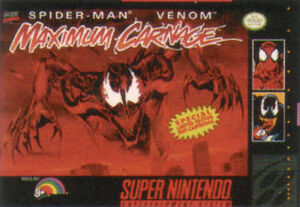 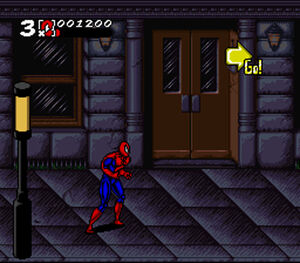 Basedd off of the Marvel Comic. Peter Parker (Spider-Man) recently attending a funeral of his best friend Harry Osbourn has received word that his symbiotic being named Carnage has returned to wreak havoc on New York. He also teams up with his long time rival Eddie Brock (Venom) and several other superheroes to stop Carnage before it's too late.

You play as Spider-Man (and later you can choose from either Spider-Man & Venom), as you roam through the back alleys of New York to rid the city of not only street thugs but super villains that joined Carnage. You can not only punch and jump kick but also (and true to Spider-Man tradition) web sling across buildings and even crawl up walls. The power-ups consist of hearts which restore health, Spider-Man or Venom symbols which are extra lives and exclamation points which give you continues.

By how the gameplay is. This is a adventure fighting game for the most part (similar to that of Double Dragon, Final Fight and Streets of Rage). Though what Spider-Man can do that the characters of the previous aformentioned games can't do is defend themselves and grab enemies from distance. I have also played this game, and it was quite difficult (especially with a limited continue counter). Though what is cool about this game is that (under the right conditions) either Spider-Man or Venom can grab 2 enemies at one time and smash them together. 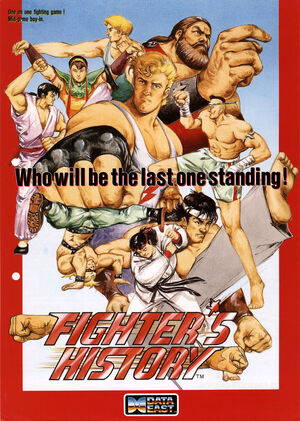 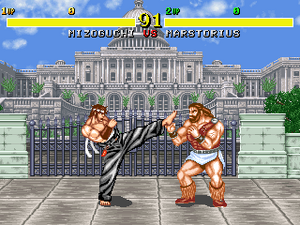 Kazhak villain named Jinborov "Karnov" Karnovski is now hosting a fighting tournament called "The Great Grappler", 9 fighters from every 4 courners of the globe are now competing against each other in order to fight Karnov and to be the best.

The gameplay is like your typical tournament fighting game. You choose one of either 9 characters of the game and compete against them as you make your way to Karnov.

Well, Fighter's History will forever be known as the "Clone of Street Fighter". This is the first of many "Street Fighter Clones" that will eventually began the "Tournament Fighting Game Craze" that'll be one of the many symbols of the 1990's. In fact, the game played so close to Street Fighter, that it caught the attention of Capcom who sued Data East for plagerism. Of course, in the end the court had ruled in favor of Data East as this game isn't plagerizing Street Fighter. Now I haven't played the first game, but I downloaded the sequal Fighter's History Dynamite for Wii Virtual Console, and this game isn't nearly as bad as people turn it out to be. 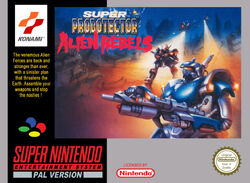 The Year is 2636, humans and robots are living together in peace. But as a surprise Alien attack destroyed nearly the entire planet, the probotectors are activated to fend off this fresh threat to the world.

In this game, it's basically a standard side scrolling shooter, there are many gun power-ups you can use such as lasers, a flamethrower, a spreader gun and even missiles. You also use a tank against aliens.

What is it a clone of?Edit

Every way you look at this game, it's basically like Contra 3: The Alien Wars, instead of Ray and another human character, the protagonists are robots. Nevertheless, it plays very similarly to the good Super NES game. Almost everything in this game is just a re-design of Contra 3. Here are some videos and even some images that state this claim. 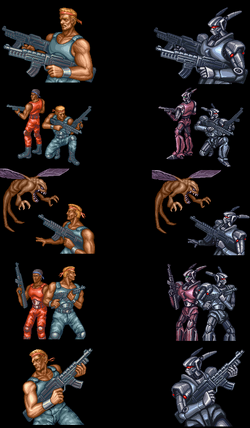 Retrieved from "https://johnnyotgs.fandom.com/wiki/Game_Clones?oldid=7176"
Community content is available under CC-BY-SA unless otherwise noted.