One of the strongest of warriors in not only Earthrealm but in the entire Mortal Kombat universe. Liu Kang was destined for greatness. Raised by Shaolin Monks (though it's unclear if Liu Kang is one himself) and was taught in the ways of martial arts by Outworld master Bo 'Rai Cho. Liu Kang was destined to represent the Shaolin Temples in Mortal Kombat. Not only did Liu Kang fight his way to earn the title of "Champion of Mortal Kombat" but he also became one of the more memorable characters in tournament fighting games (and one of the more memorable fighters inspired by legendary Martial Arts movie star Bruce Lee).

Though Liu Kang didn't start wearing his bandana until Mortal Kombat 2. But Like Ryu from Street Fighter, he likes to show off his determination to his opponent when he fights them. It has no special powers but it does show how confident Liu Kang is.

Liu Kang's strength is very strange and very difficult to understand at first. But he's much more stronger than that of a normal human being from Earthrealm. Because his strength (along with small fire power) can allow Liu Kang fight and defeat huge monsters (such as Goro) and powerful scorcerers (such as Shang Tsung) and even Extraplanitary Superheroes (such as Superman). Liu Kang has proven that he can defeat any advesary that stands in his way.

Liu Kang's pants at first was just plain black Kung-Fu pants. But as he won Mortal Kombat, he even changed his pants (black with red stripes) to show his newfound confidence to his advesaries. They also don't have any powers either (like his bandana) but it's a nice display for Liu Kang (this is because he seldomly wears a shirt). 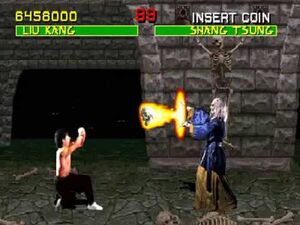 Liu Kang embraced his destiny and competed in the tournament. He defeated foes such as Scorpion, Sub-Zero and eventually Goro and Shang Tsung. With that he became Champion of Mortal Kombat. 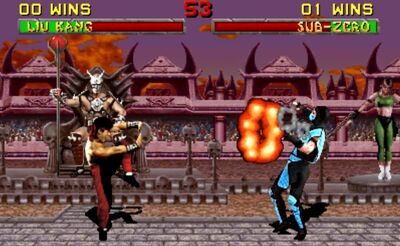 Liu Kang defended his title as Champion by facing Kitana, Baraka, Shang Tsung (again), Kintaro and Shao Kahn. Though Liu Kang founght hard and bravely, but spilled a lot of blood in the process, which didn't suit some gamers (or the governament) very well. 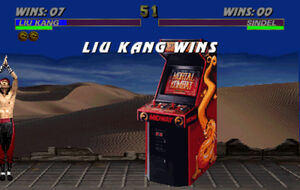 Liu Kang defended not only his title once again, but his home realm from Shao Kahn. Liu Kang also proved that Mortal Kombat is still an arcade smash.

Liu Kang jumped from the video screen to the silver screen. In the movie (portrayed by Martial Arts champion Robin Shou) he competes in Mortal Kombat to avenge the death of his brother Chan at the hands of Shang Tsung. The movie was a hit and it arguably saved the idea of turning video games into movies.

Liu Kang showed off his new (and only) shirt to fight for Earthrealm once again in the fight with the fallen elder god Shinnok. 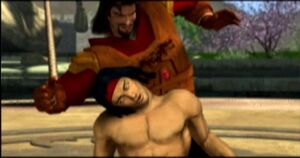 Liu Kang would be dealt not only his first defeat since his debut in the first game, but a death blow by the combined strength of Shang Tsung and Quan Chi. With Liu Kang dead, his fellow warriors also suffered the same fate as he, leaving earthrealm at the whim of the Deadly Alliance. 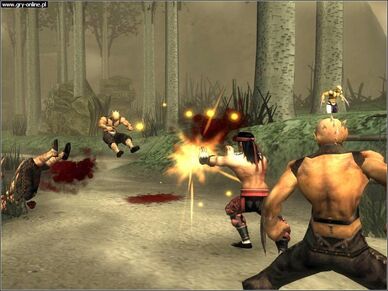 In a re-telling of his story from the first 2 Mortal Kombat games, he and his friend Kung Lao defeated Shao Kahn and saved Earthrealm. Thus adventure was a good one (unlike Sub-Zero's or even Sonya and Jax's). 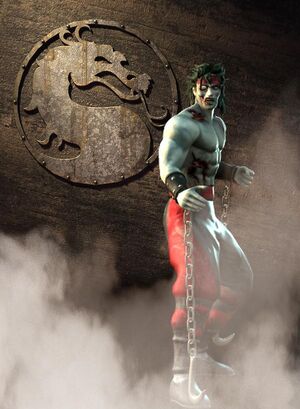 Liu Kang was brought back from the dead by Raiden, thus he went on a mindless raging killing spree. It found Shang Tsung and defeated him and even avenged himself, but wasn't able to stop the empowered Shao Kahn. 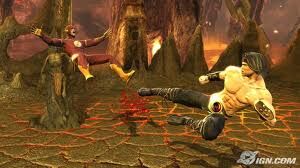 Liu Kang used his powers to fight the Superheroes of the DC Universe. Though he would succumb to what's known as "Kombat Rage" during these events. But he would help his fellow warriors (and Raiden) defeat the being Dark Kahn. 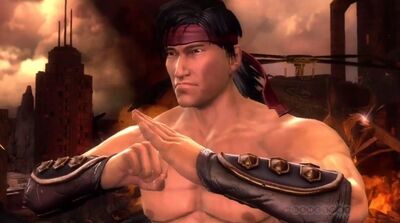 As Raiden goes back in time, he lets Liu Kang defeat Shang Tsung (as he did before) and Shao Kahn in Outworld. But Liu Kang was stopped and badly injured in his fight with Raiden as Raiden told Liu Kang to let Kahn merge Earthrealm with Outworld in order to receive help from the elder gods.

Retrieved from "https://johnnyotgs.fandom.com/wiki/Liu_Kang?oldid=5610"
Community content is available under CC-BY-SA unless otherwise noted.