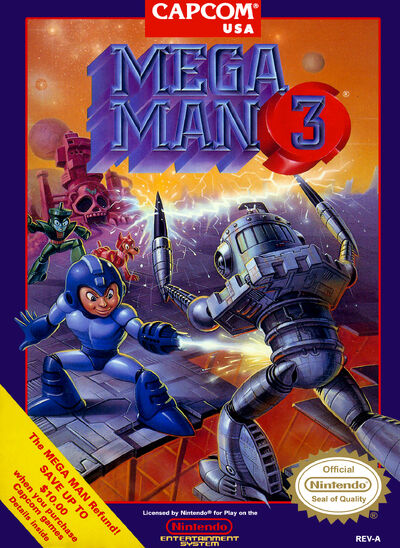 Several months after Megaman defeated Dr. Wily again, and it seems that Wily had reformed because he has joined in the "Peace robot" project which consist of constructing a giant robot master known as "Gamma". However, Megaman isn't sure about Wily's involvement in this project. Suddenly, 8 robot masters have attacked in many parts of the world, Megaman must stop these robot masters before they destroy the Peace robot project.

Megaman 3 has several new features. Not only does Megaman have the ability to slide along the ground (as depicted in the picture above) to cover more ground quicker and slip into tight spots, but it also introduces one of many of Megaman's robotic animal friends: Rush. Rush has 3 features, the Rush Coil which can propel Megaman to areas that are normally too high to reach, Rush Marine which can help Megaman traverse underwater better than he can on his own, and Rush Jet which can help Megaman cross long gaps or even fly over spikes. Once you defeat all of the robot masters, you'll face 8 other robot masters that mimic the weapons of that of the robot masters in Megaman 2, an added bonus to the game's challenge

Not as popular as Megaman 2, but the game did receive a lot of good feedback to it's familiar gameplay and it's high level of challenge.

Retrieved from "https://johnnyotgs.fandom.com/wiki/Page_3:_The_fight_for_Gamma?oldid=9560"
Community content is available under CC-BY-SA unless otherwise noted.