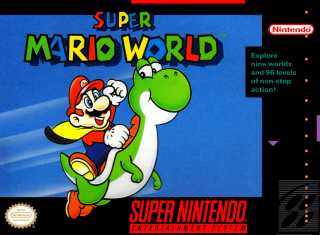 Nintendo has decided to upgrade with the introduction of the Super Nintendo Entertainment System, this was the game that came with the original model of the console.

Some time after Mario and Luigi saved the 7 kings and rescued Princess Peach from Bowser Koopa and his Kooplings. They venture to another land called Dinosaur Land which has a lot of prehistoric creatures. But as soon as they arrive, Peach is kidnapped by Bowser, again. Mario and Luigi must rescue her.

Because this is a game for a new video game console, it features brand new graphics and with it brand new environments. The enemies are a bit bigger now (even Bullet Bills), Mario and Luigi can be launched out of some warp pipes. There are new stages as well, this game features Ghost Houses where you'll face Boos (though they debuted in Super Mario Bros. 3). This game also features a very unique power-up known as the "Cape Feather" which puts a cape on Mario and Luigi's back (like a superhero), but the cape is more than just looks it has similar abilities to the Racoon Leaf but more complicated and better, a veteran gamer will get the feature quite quickly. But the Cape Feather isn't the only power-up unique to this game, there's also the "Power Balloon" which turns Mario and Luigi into balloons and allows them to float in the air temporarily. This game also features a new staple in the SMB cast: Yoshi. Mario and Luigi can ride him and he can eat berries and even some enemies, even better is that Yoshi has asked a few friends of his to help the Bros. and these friends of Yoshi's have their own unique abilities. The red Yoshi can turn Koopa Troopa shells into fireballs, the blue Yoshi can gain wings and fly with a troopa shell in his mouth, the yellow Yoshi can cause small earthquakes with a troopa shell in his mouth. There's even a feature where you can carry a power-up into a stage with you when you're already powered-up, this gives you the ability to actually switch power-ups during a stage to save a power-up or to use 2 at one time to reach a certain area.

This game also features a lot of stages and alternate exits. Depending on which exit you take in any given stage, you'll open up another path that'll lead you to something special. In fact, there's a star road world in this game that has a transport stage to a "Special" world with 8 stages that are especially challenging, but completing them will alternate the look of the game, literally and figuratively. Troopa Shells will turn into Mario Masks and the world map will change colors.

As always, Super Mario World received praise and admiration from gamers all over. For it's graphics and gameplay. It is also known as one of the better SMB games. However, it is also at the same time where the Super NES was facing compeition in the form of the Sega Genesis. The competition between the 2 consoles will be fierce with their library of games.

Retrieved from "https://johnnyotgs.fandom.com/wiki/Page_4:Super_Mario_World?oldid=9418"
Community content is available under CC-BY-SA unless otherwise noted.