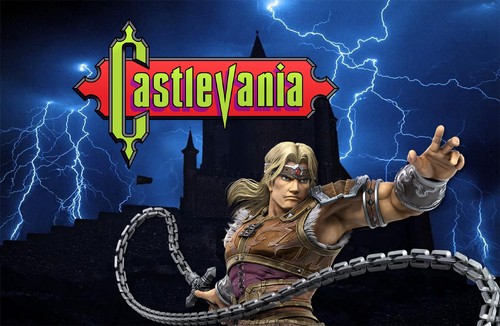 Ever since the Crusades, the events of Castlevania is long and very illustrious. However, it was a story of a courageous family of vampire hunters known as the Belmonts fighting against the most infamous vampire in any fictional media, Count Dracula. 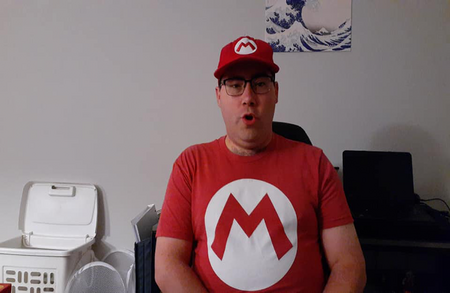 As you will find in these series of wiki pages, the Belmont family would stop Dracula from taking over the world.

Here is a timeline of the games, according to the former game developer Koji Igarashi (CKA Iga). 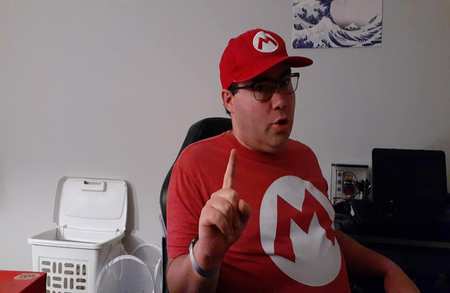 But, these series of wiki pages will tell you the canon Castlevania games in detail. This page will cover Lament of innocence (since it's the origin story.

In the late 11th century, shortly before the Crusades, the Church sent brave warriors to defeat and silence heretics and heathens. But, there was a 2-man team that was incredibly successful: Leon Belmont (a brave warrior and well respected in Europe) and Mathias Cronquist (a genius war tactictioner). 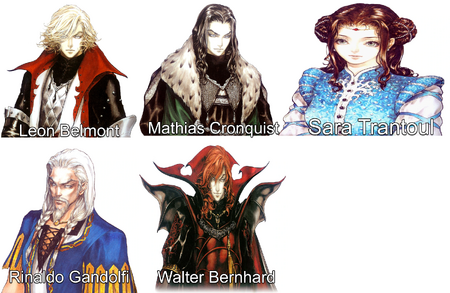 Leon Belmont: The Church's greatest warrior. He would gain his reputation all over Europe and would earn the title of "Baron." But when he got word that his fiancee "Sara Trantoul" was kidnaped by a vampire named "Walter Bernhard," he set out on an adventure to find her, even after being denied permission from the Chruch. According to his friend Mathias, Walter headed back to a castle in a forest called "Eternal Night." What he would soon realize that his quest will begin a legacy for his future family.

Mathias Cronquist: A Genius war tactictioner who also gained a continent-wide reputation for his skills. He would tell Leon about what happened to Sara and where she was being taken. But unknown to even Leon that Mathias would go through a personal tragedy which would question is loyalty to the Church as his beloved wife, Elizabetha, would die while he was away to war. Being bedridden for some time, he would go on his quest to act revenge on the Church.

Sara Trantoul: Leon's fiancee. A nice, kind, loving woman. She was kidnapped by the vampire Water Bernhard, and now is waiting for rescue (hopefully by Leon). But her involvement would also be crucial to Leon's future destiny.

Rinaldo Gandolfi: An Innkeeper in the Eternal Night forest. He meets Leon when he ventures into the woods. Rinaldo will also play a role of the Belmont Destiny by giving him a whip and rescuing Sara from Walter. When he was young, Rinaldo also hunted down vampires.

Walter Bernhard: The infamous vampire that kidnapped Sara. Walter is waiting in his Castle full of night dwelling monsters for Leon to rescue Sara (if he can). But little does even Walter know is that he's a pawn in a more sinister game. 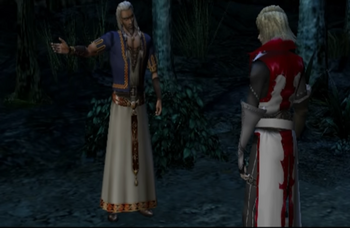 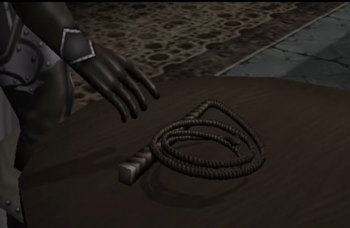 After being denied permission from the Church to go on a quest to rescue his fiancee, Sara, Leon Belmont, gave up his title of "Baron" and thus his sword. Unarmed, he ventures to the eternal night forest regardless until he runs into Innkeeper, Rinaldo Gandolfi, who decides to help the young adventurer. Leon tells Rinaldo his purpose to come to the woods and that Sara was kidnaped and brought into the nearby Castle. Rinaldo even warned Leon about the dangers of the Castle and how the night empowers this Castle—knowing that Leon was unarmed (as he gave up his sword as he gave up his Baron). Rinaldo gave Leon a whip made of "Alchemy," making it robust against creatures of the night. Just as Leon was about to leave, Rinaldo tells him to put out his left hand; Rinaldo uses a small rite to empower Leon's hand with some powers where he can steal the powers of some night creatures. 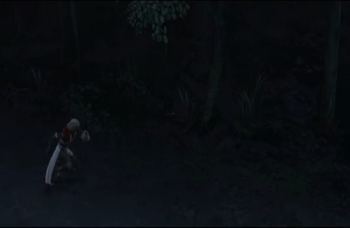 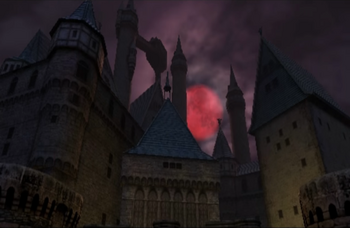 With his new weapon and powers, Leon ventures off to the Castle determined to save Sara. But Rinaldo tells Leon that the door leading to Walter will only open when the five guardians of the door were defeated. 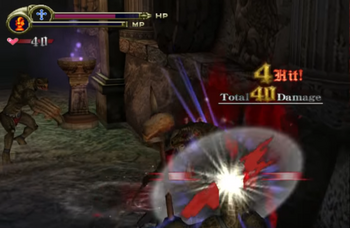 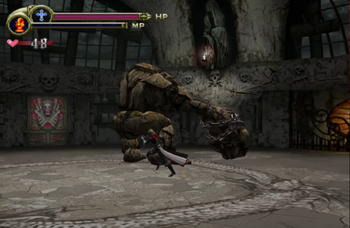 Leon had faced a legion of powerful night creatures such as skeletons, Mermen, Living Armors, Ghosts, and Golems, as well as traps that are in the Castle. 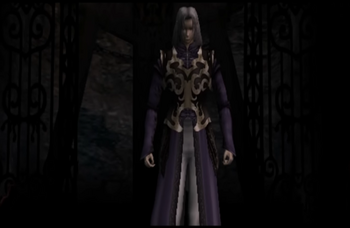 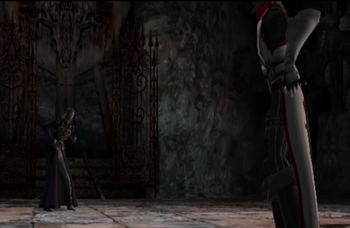 As he was facing one of those five guardians (named Joachim Armster), Leon would discover some "stones," which were considered prized artifacts to vampires. The Ebony Stone, which it's power, keeps night in eternal night forest, the Philosopher's Stone.

Leon would ask Rinaldo about these stones and says that he does have the Ebony Stone which, combined with the Philosopher's Stone, will grant alchemy's goal; immortality.

After Leon fights and defeats another guardian (a Succubus), he returns to Rinaldo and asks him about it. This is when Rinaldo would tell him that the Succubus was his daughter, who was vampirized by Walter and killed the rest of his family; the reason why Rinado is helping Leon on his quest, he wants revenge on Walter for the killing of his family. 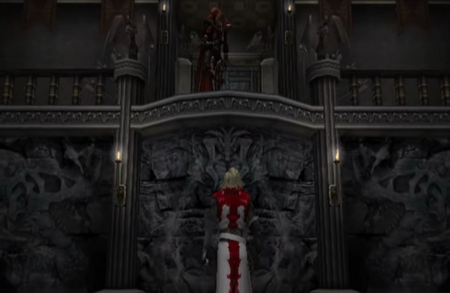 After Leon defeats the five guardians, he would meet up with Walter himself. Leon tries to strike Walter with the whip, but couldn't (because Walter was too powerful of a vampire). But alas, he gives up Sara to Leon, they head back to Rinaldo's Inn. 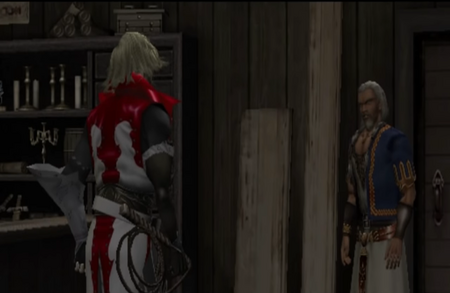 But as Leon and Sara head back to the Inn, Sara reacts to the barrier protecting the Inn. When Rinaldo comes to them, he tells Leon to head back to the Inn. Precious minutes have gone by, and Rinaldo has informed Leon that Walter has vampirized Sara. The two argued for some time (as Leon was in shock and denial). 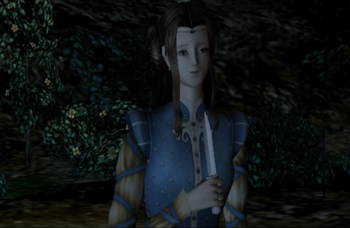 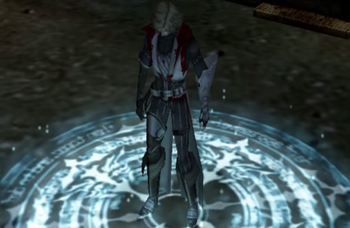 Sara (somehow) overheard the two men and stepped outside and was opting to commit suicide as she didn't want to live forever as a vampire. Leon tries to assure to Sara that everything will be okay. Then Rinaldo tells Leon to use the whip on her, to unlock the whip's real power, it needs to be infused with a good-natured soul that is unwittingly tainted, and Sara's soul is everything the whip needs. With much reluctance (due to his quest), Leon decides to use the whip on his fiancee. As Sara dies, her soul has now made the Alchemy Whip pure. As Leon lays Sara to rest, he knows now what he needs to do; defeat Walter. 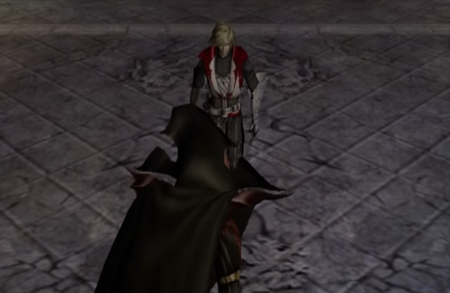 Leon faces off with Walter once again, this time with Leon's whip infused with Sara's Soul, and with it, Leon was able to defeat Walter. Defeated and surprised, Walter warned Leon that in some form, he would return; the Grim Reaper than came and killed Walter.

Final Battle with a former friendEdit 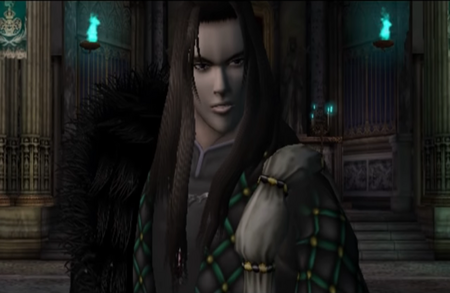 What turned out is that Leon's old friend and partner, Mathias Cronquist was the real mastermind behind the entire thing in the eternal night forest. After being bedridden, Mathias went on a quest of his own to find another treasure of the vampires "The Crimson Stone." Which, with a soul of a vampire, can grant the bearer immortality, but at the cost of his humanity. Mathias hopes to use it against humankind and against the Christian god of Jehova, who Mathias blames for the death of his wife. 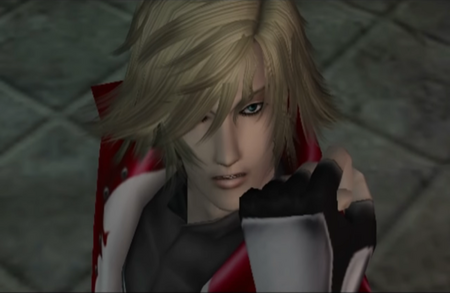 The two men fight in an epic clash, but with the power of the Alchemy Whip, Leon was able to defeat Mathias. As Leon stands victorious, he makes a solemn vow to the whip (which he will call "The Vampire Killer") and his future generations that it will be the job of a Belmont to "Hunt the night" wherever it may be and *whoever* it may be. Mathias disappears, the Castle crumbles, and daylight returns to the forest. Rinaldo congratulates Leon on completing his quest and for defeating Walter.

In the time after Lament of Innocence, Leon would marry another woman and teach his son to be a vampire hunter and to "hunt the night." But in the centuries following Leon's quest, the Belmonts grew in power, eventually to the point where the people would fear them, and they were asked to leave from public eyes, and never return.

Mathias Cronquist would survive since the Crimson Stone now gives him immortality. He would venture al over Europe (causing chaos as he does). Mathias would eventually go back to Wallachia as the Ottoman Empire plans to take over. Mathias (wanting everybody to think he's dead) took on a new name, Vlad Tepes, he would marry a woman named Lisa, and they would have a son together; Adrian Fahrenheights Tepes. Again, he would go on to war against the growing Ottoman Empire, but what would happen will make Vlad develop a hatred towards humans and Jehova that will never waiver.

That will be in Part 2 of the Castlevania series of pages. Just click here to continue reading. Until next time, this is JohnnyOTGS signing out.

Retrieved from "https://johnnyotgs.fandom.com/wiki/The_Story_of%7ECastleVania_(Part_1:_Lament_of_Innocence)?oldid=11391"
Community content is available under CC-BY-SA unless otherwise noted.