Hello everybody and welcome to another edition of Johnny's Game Profile. This one is a special 2-part Game profile as it'll talk about a fan-made video game. This one is called Command & Conquer: Mental Omega.

The story of Mental Omega is basically a re-telling of Red Alert 2 where the Soviets are launching an all-out invasion of the United States. In this version of the game, the Soviet Advisor: Yuri already has his own faction and is working with the Soviets, and so like in the original game, Yuri's faction (known as Epsilon) compromises the US' ability to retaliate against the Soviet Invasion by destroying their Muclear missile base in California (unlike in the original game where Yuri uses his Mind Control abilities to compromise the US' retaliation). After the destruction of US' Nuke bases, the Soviets proceed with their invasion which took the US Forces by complete surprise, though the US was able to defend Washington DC, but the Soviets were successful in their invasion as they took over New York and San Francisco, though the huge blow to the US was that the Soviets (along with it's branch Faction in Latin America) had invaded San Antonio and were able to assassinate President Dugan (unlike in the original version where in the Soviet Campaign he was Mind-Controlled). As the Soviets invade the US, they also begin their campiagn for Eastern Europe and once again the Soviets with the help of Epsilon have defeated the Allies (the European Branch) and caputred Ukraine.

The Allies also try to re-take the US after the Soviets' relentless plow through the US, they try to recapture the Air Force Acadamy Chapel (like in the original game) as well as taking Mayport and temporarily take back New York. They also repel a Latino Invasion at the Mexican Border and Japan (another Allied branch) tries to invade the USSR, but they failed. But as when the Allies were gaining Momentum, the Soviets strike back as they destroy both Chicago (like they did in the original game) and St. Louis as the Allies destroyed a Psychic Beacon and a Psychic Amplifier, and with this things were again turning bad for the Allies as the Soviets are now ensured a victory. The Allies conducted a mission on Sakhalin Island where Special Agent Tanya (through intel received from the Japanese) to find the Soviets' top secret MIDAS weapon project (a huge destructive bomb that has the power to destroy major cities like some of the American cities) she obtains the intel and with some help from Europe, they destroy the facility as well as 6 MIDAS bombs what is known as Topol-M platforms, but not before the Soviets score another major victory by taking Hawaii and even destroying the communications facility in Czechoslovakia, cutting off Europe's communication with Japan, but were recovered by a swift Allied counterattack led by a descendant of Einstein named Siegfried using some of his ancestor's technology.

Another mission was conducted in Kyoto as the Europeans need the help of Japanese Scientists to improve the technology of the Chronosphere (the Allies' biggest hope to turn the tide of the war) but the former capital was also crawling with Chinese Qulin Tanks, despite this the Allies were able to Chronoshift the Japanese Scientists to Germany (though not knowing that the Russian and Chinese forces have sabotaged the Chronosphere which made the Chronoshift a bit off, but the Europeans were able to escort the Scientists to SteinTech Labs in the Black Forest. The Allies were successful repelling the first invasion of Russian and Chinese forces, but the Soviets were just using their forces to set up a pair of MIDAS bombs to destroy the Black Forest as well as the Chronosphere and Einstein's Lab, the only silver linings are that the Scientists were able to evacuate to the last remnant of Allied sanctuary: Great Britain. But as the Allies were making their last stand for the Free World, the Soviets invade Japan to discover that China is trying to steal Japanese war technology, but the Soviets have stopped them, which damages the alliance between Russia and China, China than invaded Russia and destroyed the last MIDAS bombs further damaging the relationship between Russia and China, there is also a falling out between the Soviets and Yuri's Epsilon's forces, China then forms an uneasy alliance with Japan, but this crumbled quickly when a Psi-Corp induced misunderstanding has resulted China and Japan fighting over the Korean Peninsula.

As the war drew to a close, the Allies were able to make their last stand by fending off the Soviets and because of this, Great Britain as well as Ireland become the only places in the world not taken over by the Soviets, peace came for the world (under the Soviet heal) but it wouldn't last for long. Yuri would come up with his own campaign for the world by using his Mind Controlled technology to control everybody in the world, thus begins what is known as the Mental Omega Wars (a re-telling of Yuri's Revenge).

Yuri makes his first move by having his Epsilon forces invade Moscow, they leave the city in ruins and Yuri assassinates Premier Romanov (like he did in the original game, but not planting the crime on somebody else this time), the Soviets once the dominant faction in the world, now is in utter chaos, this forces Russia to rekindle it;s relationship with China (who is still fighting against Japan) due to them having a common enemy. Meanwhile, the Allies (huddled on the British and Irish islands) also go to war against Yuri, but also want to take the opportunity to liberate the world of the Soviets since the faction is in disarray thanks to Yuri.

As of right now, this is what is known about the Mental Omega game as of right now. However, there is some information that there is a new faction in the making known as the Foehn Revolt and it's based on a secret society which uses technology that is way ahead of anything that is known. But whether they are good or evil is still unknown. 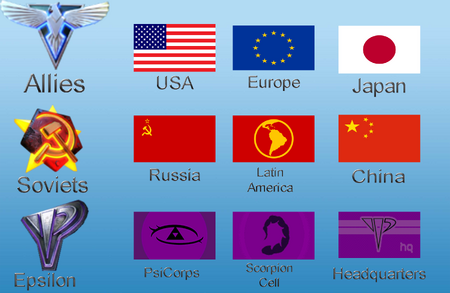 There are 3 factions (not incliding the Foehn Revolt) which you play as in this fan-made game. Like in the original game, there are nations that use specific units, but this is taken to the next level in this game where there are 3 branches.

The allies have the middle of the road technology, they're more technologic than the Soviets, but not as so compared to Epsilon.

USA: The American Branch has a good mixture of infantry as well as armor units and air units, they also rely on Paradropped units and can also use an orbiting laser weapon as a superweapon.

Europe: Heavy with Armored units, it also uses units that uses the forces of nature to attack their enemies.

Japan: Japan relies on a huge robotic force which are immune to Yuri's Mind-Control Technology or any other un-natural weapon Yuri may use.

The most Primitive of the factions, it relies heavily on their armored units as well as mass producing infantry. The branches pretty much share a lot of the same units.

Russia: Probably the most basic branch of the Soviets as they rely on some of the basic units in the game, mostly from RA2 and YR. They can also paradrop armor units.

Latin America: The Latinos rely on some fire based units and can even build a fire defense weapon as well.

China: China has some of the same units as Russia and Latin America use, but some of them are advanced version of what the other Soviet Branches use, but they also use some primitive units as well, they can also use some Electromagnetic weapons to disable some armored units.

This is Yuri's faction, and its the most technologically inclined faction. Like in Yuri's Revenge it uses Yuri's infamous Mind-Control Technology to take control of other units.

Scorpion Cell: Because it's named for a Scorpion (a poisonous insect) it specializes in a lot of viral and poison technology and have some fast armored units as well as using dummy structures to divert the enemy away.

Epsilon Headquarters: It specializes in Genetic Technology (mutating units) and has some of the hard hitting armored units in the game. 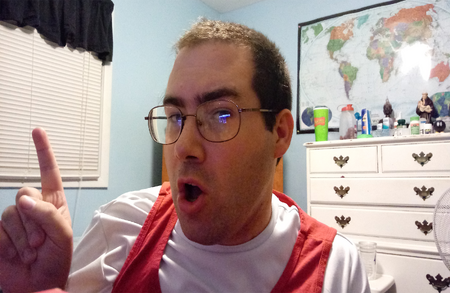 Now, I said that this is a 2-part Blog Post, because I would also like to talk about the units in the game, and since they're a lot of these units, I have to make a separate post just for them.

So, that is part 1 of this 2 part Blog Post. Don't forget to check out my Movies and World wikis. Until next time, this is JohnnyOTGS signing out.