Hello everybody and welcome to another edition of Johnny's Game Profile.

Today, I'm going to talk about an obscured Beat-'em-up known as Dynamite Cop. 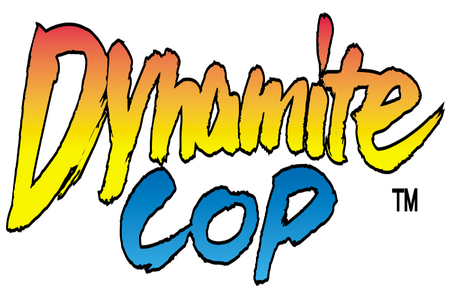 As said before, Dynamite Cop (known in Japanese as Dainamaito Deka (Dynamite Detective or Dynamite Cop) is a rather obscured beat-'em-up which is the likes of Double Dragon, Final Fight and Streets of Rage. You are one of either 2 cops: Bruno "Mr. Dynamite" Delinger or Cindy Holiday with the job of rescuing the Daughter of the American President who is held hostage by the evil Wolf Hong who is trying to steal money from the brand new sckyscraper named Eternal City a fictional building in San Francisco. 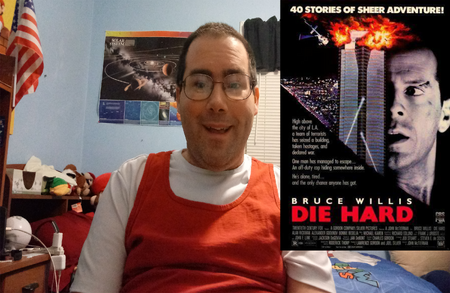 Now, if this sounds a lot like the movie Die Hard to you, well continue reading this blog because there's more about this.

This game is actually more akin to Double Dragon as it has a separate punch and kick buttons (in contrast to Final Fight and Streets of Rage where there's only one attack button) which performing certain moves, Bruno and Cindy can also grab their enemies to either use CQ punches or toss their enemies a la Mario from Super Mario 64. The game also has a system of weapons to use, but unlike in Double Dragon where there's a few weapons to use, you can use a wide variety of weapons ranging from melee weapons such as mops and robot legs to firearms such as handguns, machine guns, anti tank guns and even a quad rocket launcher to fight and defeat the enemies, you'll even get to use a shaker full of pepper which is to disorient enemies. There are also "quick time" moments where you need to press a certain button and you'll have a certain amount of time to do so or you'll lose health.

The enemies also of the variety of enemies to fight, apart from your usual street thugs, you also fight against leather clad dominatrixes, sumo wrestlers, fire fighters (corrupted of course) and even robots. You also face giant enemies (as bosses of course).

A quirky feature of this game is both Bruno and Cindy's outfits. From the outset of this game, their outfits start off fresh, but become tattered as the game progresses (which may or may not be a reference to Die Hard because John McClane (Bruce Willis) fights terrorists barefoot and only with a filthy undershirt and pants).

Now, I did say that there's more about the movie Die Hard, and that is because there are changes to the game when it reached the USA which were inspired by the movie.

In comparison to the Japanese version, Die Hard Arcade has a similar story, but (as stated before) the changes made to this game are inspired by the movie, perhaps Dynamite Cop was inspired by the movie, after all Bruno has Bruce Willis' likeness in some of the game's artwork. Anyway, instead of Empire City in San Francisco, it's Nakatomi Plaza in LA (you can see in the US version of the game that it has the Nakatomi symbol in some stages). Bruno and Cindy are re-named John McClane and Kris Thompson respectively. But what didn't change is the story. McClane and Kris still have to rescue the President's Daughter from Wolf Hong (he's not replaced by Hans Gruber), and Hong himself is still has the intention of stealing money. The outfits still deteriorate as you progress through the game, and the gameplay is also the same.

Dynamite Cop received an update when it was released on Playstation 2 where it looks a bit better than the original arcade version. However, what has changed with this version apart from improved graphics is they also added some elements that weren't in the original game. It also added some Christmas decorations inside the building and even snow when you're outside (eventhough San Francisco doesn't receive a lot of snow). The game also has references to Sega's other Beat-'em-up, Golden Axe, the assumably unlockable characters (Ax Battler and Tyris Flare) but the third boss is Death Adder and a sea monster replaces a fish in the aquarium and statues replace certain furnature. Though, the voices are in English, it was never released outside of Japan.

A few years later. Dynamite Cop was given a sequel. Bruno Delinger is back, and his arch-nemesis Wolf Hong returns to kidnap the President's Daughter, only this time on a luxurious cruise ship al la Speed 2: Cruise Control.

Unlike the first game, this sequel has improved game mechanics, in the first game, you can only attack left or right, in the sequel you can attack in all 8 directions. The game also allows you to choose on how to get on the cruise ship, either airdrop and land on top of the ship, motorboat and enter through the cabins or suba dive and enter through the cargo area. Bruno also has new team members: Jean Ivy and Eddie Brown. Think of Final Fight, as Jean is the "fast and low power" type, Eddie is the "High power and slow" type and Bruno is well-balanced, but all 3 have their own set of moves too. Some of these movies include using defeated enemies and actually throw them. You also get to use both melee weapons and even firearms and even health restoring items, in addition there are also power-ups that can either redern you invicnble temporarily or allow you to do more damage to your enemies (temporarily of course) The outfits the players use again deteriorate, but when your health gets low, not when the game progresses. Unlike the first game, this game never got a US release, but it was released in Asia and titled Dynamite Cop EX: Asian Dynamite.

Well, that is it for this edition of Johnny's Game Profile. Don't forget to check out my Movies and World wikis too. Until next time, this is JohnnyOTGS signing out.