Hello everybody and this is another edition of Johnny's Game Profile. This edition will talk about a very interesting (yet controversial) Tournament Fighting Game: Fighter's History.

A Rich, art collector named Jinborov Karnovski (or Karnov) decided to test his fighting skills against some of the world's best fighters, he creates the "Great Grappler" tournament to see who can face and defeat him in battle. 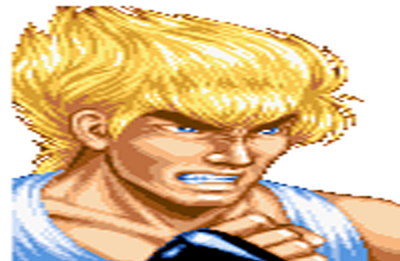 A Police Detective from Los Angeles, Ray also likes to test his Martial Arts skills on some of the world's best fighters, having absolutely no interest on what prize is won for the one who defeats Karnov, he just wants to fight.

Ray's fighting style is almost like a freestyle fighting as he mixes some martial art with some professional wrestling moves. He has a projectile (the Big Tornado) a kicking move (the Wheel Kick) and even a shoulder slam move (the Dynamite slam). 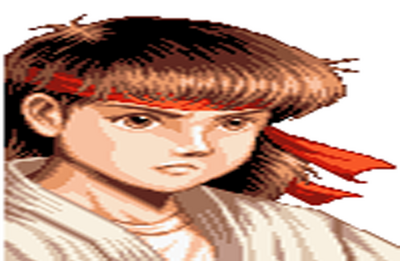 A young Judo fighter, Ryoko discovers that her grandfather (who taught her Judo) went missing. She enters the tournament to find out what has happened to him.

Ryoko uses Judo, but she can also avoid projectiles and is much faster than Marstorious (another fighter who uses grabbing techniques). 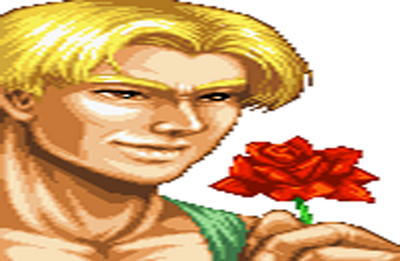 A French Gymnast who likes to focus on perfection, but when he scored only a 9 in one Gymnastic competition, he began to study Savate (a French Martial Art) in hopes to achieve perfection again. He enters the Great Grappler Tournament to see if his skills match those of other fighters. He also has an infatuation with some of the female fighters such as Liu Feilin and Liu Yungmie and has a rivalry with Samchay Tomyamgun.

Jean can be compared with both Guile and Vega from Street Fighter. He considers himself vain (like Vega) and some of his special moves are similar to Guile's. 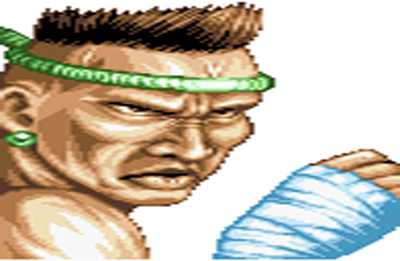 A Muay Thai fighter who cares deeply for his younger brothers, in hopes that his brothers are taken care of he enters the Great Grappler Tournament. He has a rivalry with Jean Pierre.

Not exactly a Sagat rip-off, Samchay uses a projectile and even has a Knee special move which he uses to  attack his opponents, and it goes across the screen. 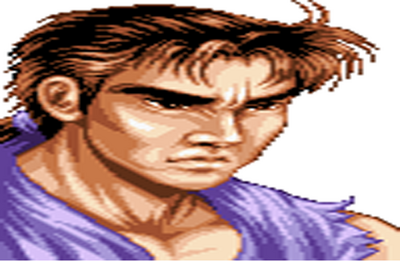 A secluded Kung Fu fighter in some of the remote pareas of China, after his father was killed in a fight by Karnov he decides to enter the great grapple tournament in hopes to act revenge. He is also known in his fighting tribe as Tendok.

Lee is somewhat similar to the Lee in the first Street Fighter game, he uses a punch move which is similar to Lee's move, he also has a rising kick special move as well, these moves make Lee (somewhat) a risky fighter to play as since his moves need to be nailed or risk getting countered. 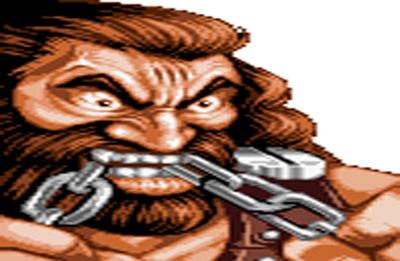 An aging professional wrestler who wants his last licks to prove that he still has it, he enters the great grappler tournament in hopes to prove his point. The only thing he is afraid of is his wife (especially if he is late for dinner).

Almost (but not quite) a Zangief wanna-be, his style of professional wrestling has him doing some drop kicks and even back breaking moves as well (which can not be blocked). 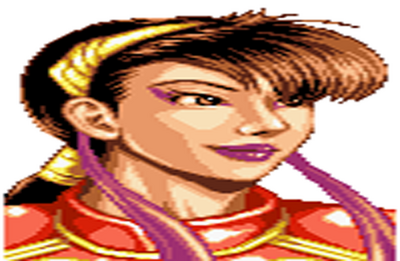 A Chinese Opera Dancer who also has a knack for fighting, to prove her skills she enters the Great Grappler tournament.

Feilin has more similarities to Ryu and Ken than she has with Chun-Li. This is because her fighting style and special moves have projectiles and even an Andy Bogard style move where she swings her arms and goes upwards, but what she can do though is use a projectile while she is in the air and against her hapless opponents. 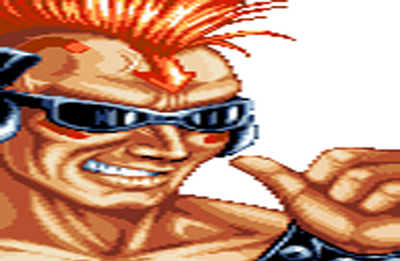 A British Guitarist who hopes to someday form his own Punk Rock Band, he enters the Great Grappler Tournament in hopes to defeat Karnov, believing that he has a base that can play any song.

Matlok is more like Guile than Jean is. He has a Sonic Boom-like move and a kicking mvoe which is like the Flash Kick.

Matlok is inspired by Glen Matlok: The Lead Guitarist of the British Punk Rock band, the Sex Pistols. 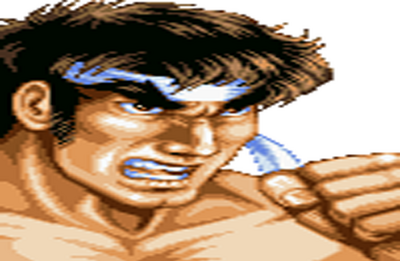 A carefree Japanese person who was taught his family's own version of Karate, wanting a life of his own he abandoned his family and has joined a Mongolian Crime Syndicate.

Like Marstorius to Zangief, Mizoguchi is almost (but not quite) a rip-off to Ryu. He has a projectile move (which is too big in my opinion) as well as an uppercut move which makes Mizoguchi slide along the ground rathger than lift him into the air. He also has a Kicking move (not to be confused with the Hurricane Kick).

It is still up for debate whether or not Mizoguchi is the main protagonist or not, nevertheless he has his own Fighter's History spin off game which was available only in Japan. 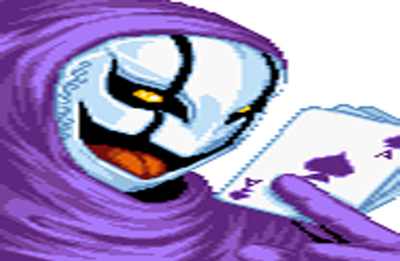 A French Magician, there really is not much known about him nor his purpose in why he is in the Great grappler tournament. He could be a payed guardian for Karnov.

Clown has an unorthodox fighting style as he throws playing cards at his opponents and has some kicking moves. 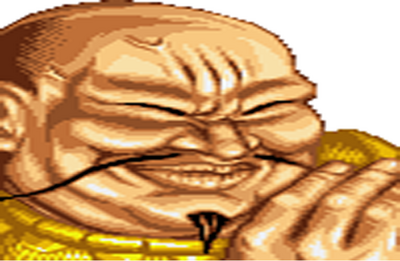 The sponsor of the Great Grappler Tournament, he created the tournament to test the skills of the world's reatest fighters. He also likes to collect old and powerful artifacts.

Karnov has an unsuaual fighting style (and some of them may go back to his own arcade game) as he breathes fire and inflates himself while he is in the air.

A year after the first tournament, Karnov decides to host the tournament once more in hopes to test the skills of the best fighters once more. 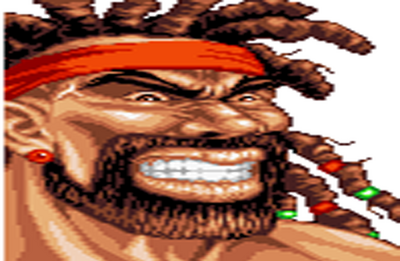 A young fighter from Africa who is a apart of a secret society which dedicates itself to protect nature. Knowing that there is prize money to be won, he enters the Great Grappler tournament to win the money for his society.

Like Ryoko, Zazie can also dodge projectiles, he is a tall fighter and his punches and kicks have a long reach. 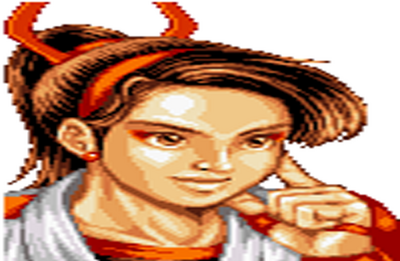 A Tour Operator from Korea, she fights with her own family's style of Taekwondo, 3 Years before the events of the second game her parents mysteriously disappeared. She enters the great Grappler tournament to find out what has happened to them. It is also implied that she may have a romantic interest in Ray (much to Jean's dismay)

Yungmie's style is a mix between Chun-Li's and King (from Art of Fighting) she has a multitude of kicking special moves and she can throw projectiles from her feet (rather than her hands).

Both games play very similarly to Street Fighter 2, there are different buttons which control the fighter's punches and kicks (and how hard they are), and each fighter has his/her own special moves which makes them quite unique within each other, in Fighter's History Dynamite however, there are also super moves (which do the most damage) and under certain conditions, you can face an Ox at the end of the game.

So similarly does these games play to Street Fighter 2, that Capcom actually sued Data East for plagierism. But because there was no evidence of plagierism, the court ruled in favor of Data East, ultimately kicking off the Tournament Fighting Game craze of the 1990's and led to other TFGs such as Fatal Fury, Mortal Kombat and Tekken.

Well, that is all for this page. don't forget to check out my World and Movies wikis. Until next time, this is JohnnyOTGS signing out.