Hello again and welcome to another edition of Johnny's Game Profile. Today, I'm going to talk about a strange PC game  called The Chaos Engine.

The stry of the game goes like this. A huge system of scientists have discovered the way to manipulate human DNA and make super mutants. But the experiment soon went horribly wrong, it wasn't long at all before the mutants created their very own cybernetic weapon that will be soon called "The Chaos Engine". The only way to stop this destructive weapon, the scientists have hired a 6 man group to destroy the engine before it destroys the world.

There 6 characters you can choose to start the game.

The soldier that does jobs clearly for the money. He is one of the more well balanced soldiers in the game with average health, speed, wisdom and power ratings. He carries a single shot rifle which does a decent amount of damage. As he gains experience, he can use the special item called the Monster Distractor 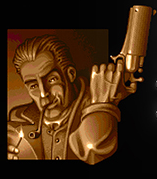 An intel from Britain. He is only slightly weaker than Brigand as he is more into intel than actual physical training. He can move quite fast. But because of (stated before) a lock of physical training he has a low health rating and his pistol doesn't do a lot of damage. He has a very viable special item: the map, as it can show you the layout of a certain level.

A burly giant that has arguably the best health rating of the game. His double barrel shotgun can also do a lot of damage. Of course, the counterbalance in this situation is that he doesn't move fast and has the lowest wisdom rating. All of his special items involve demolition as he's equipped with a Molotov Cocktail: a fire bomb which leaves a small circle of fire in it's wake to defeat enemies.

A soldier with a long history of battles, Mercenary is clearly a survival expert and a viable member of thie 6 man team. He's a lot like Brigand. But with a higher speed, wisdom and health rating, but his Portable Machine gun doesn't do a lot of damage, but he is one of the 2 soldiers that has the most important special item: The First Aid Kit.

Another battle hardened military veteran. Navvie is the slowest and the most powerful soldier in the game. His cannon does a lot of damage. Compared to Thug, Navvie has slightly higher wisdom, and that is because his deomolition special items as he can use dynamite which can destroy every enemy on the screen.

This man of the gods is the smartest of all of the soldiers, and moves quite fast. But because he spends most of his time either praying for doing sxcientific experiments, he has a total lock of physical training, and his own makeshift laser gun doesn't do a lot of damage. But like Mercenary, Preacher also has the First Aid Kit as his primary special item.

This game will not let you to traverse alone, once you hire a soldier, you must hire another one to acompany you. It is best to hire the CPU soldier that actually makes up for your character's weakness.

The game itself plays a bit like Gauntlet as it is a top perspective and you shoot mutants that come from either a cave or a hole in the ground, and you must shoot them to destroy it, and to prevent any more mutants from coming in and replacing what ever you destroyed. There are also secret areas and (more often than not) contain special items and even a hefty money trove.

Between levels, you must earn your hard earned money to upgrade your soldiers (and That includes your CPU controlled ally), though it it best you focus on the soldier's weakest attributes.

That is all I have today, for more of my blogs, check out either JohnnyTalk where i talk aout certain quirks and tidbits about certain games or basic game knowledge as well as Johnny Watches Youtube where I share some videos about some lesser known video game. Until them, this is JohnnyOTGS signing off.