Hello everybody and welcome to another edition of Johnny's Game Profile. Today, I'm going to talk about a game that has been panned by gamers and critics alike. It is called War Gods.

Supposedly a spiritual successor to Mortal Kombat, War Gods' origins are in the billions of years where some alien spaceship crashes into the Newly Created Earth and with it scattered it's cargo full of a strange elemtn known simply as Ore. Humans throughout history have used the Ore to either warship, to find power, or to perfect their own science. Nevertheless, 9 humans and 1 statue are now locked in conflict for another piece of Ore to prove thier status as a "War God" . 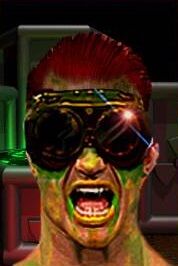 Supposedly a solider of the US Army. A veteran of the Cold War, he and his superiors were working on the Ore to try to make new and better Nuclear Weapons. During one test, Warhead was caught in thr blast of one of these ore-Powered Nuclear explosion, instead of killing him it turned him into a God.

Warhead uses a lot of military weapons in his style of fighting such as missiles and even has a Mario-Style Stomp move. His Fatality (yes there are Fatalities in this game) has him calling for an airstrike and Nuclear missiles come in and Nuke his opponent. 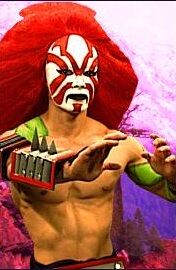 A once proud and respected Samurai from Japan. On the night before a big Samurai Battle, he discovered a piece of Ore, going what the Ore told him, it promised him a great victory. This Ore helped Kabuki Jo win the battle, but in the end it also made him go on an endless rage where he has sluaghtered his own clan. In Disgrace, Kabuko Jo committed suicide, but the Ore has taken his dead bosy and in turn turned him into a God.

Kabuki Jo uses a variety of moves such as a (of course) Katana a staff and even some fire-based moves. His Fatality has him use his staff and impale his defeated opponent. 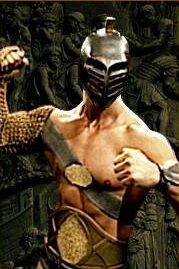 Once a tough Roman Gladiator. In one of his fights, his masters presented him a piece of Ore and if he can kill his next opponent, he will be rewarded with the Ore. But as he indeed defeated and killed his opponent, his masters went back on their promise, causing Maximus to kill his masters and take his prize. The Ore's power turned him into a God.

One of the medium-heavy characters in the game. He fights with a hammer, and he even has some grabbing special moves and a stomping move as well. His Fatality has him chain his defeated opponent and he uses a short blade to cut his opponent in half. 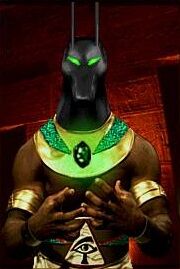 Once an Egyptian Grave Robber looking for treasure. He has made his way to an ancient burial ground where it was protected by a piece of Ore who would kill anybody that tries to desecrate the graves. Despite the warning, this robber tries to steal the treasure, the Ore kills the robber, and resurrects him into the famed Egyptian God of Anubis.

Anubis' style of fighting has him use a long staff weapon as well as a charging move and can also freeze his opponents with a Pyramid like object. His fatality brings an Egyptian Tomb on top of his defeated opponent and it Mumifies them. 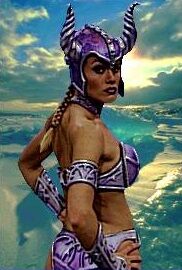 Once a Viking Warrior who was in the midst of a huge battle when a massive ice storm hit and became separated from the rest of her forces. As she takes refuge in a cave, Vallah sees a glowing object hidden in the rocks, with her sword, she knocks the rocks away and obtained the piece of Ore. She has become a Viking Goddess.

Vallah's fighting style is true to her heritage, she suses swords, axes and even shields to attack. Her fatality has her opponent on a platform, and she summons flames to cook her opponent. 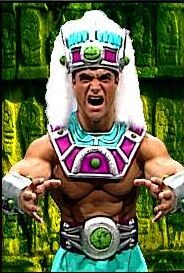 A power hungry, Mayan Priest (though he doesn't look Mayan). Ahau Kin has prophecised that a powerful piece of Ore lies beneath a sacrificial well not far from his village. He has sent thousands of people into the well to retrieve it, but none returned. This is where Kin himself went into the well to retrieve it. The Ore has turned him into a God.

Ahau Kin may not look like he is Mayan, but his fighting style does reflect the Mayan beliefs as he uses sun-like powers to fight his opponents and even use blow darts, swords and knives. His Fatality knocks his opponent onto a rised platform, he then rips out his opponent's heart a la Kano and eats it. 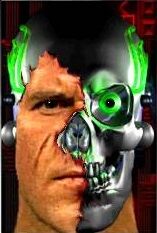 An experimental cyborg from the future. Cy-5's power comes from the power of the Ore without regard that the Ore has actually turned Cy-5 to life and turned him into a Cybernetic God. Power hungry, he searches for more Ore to become truely life-like.

Cy-5's fighting style is that what you expect from a cybernetic character. He uses lasers to fight as well as using Flying Saucers and can even teleport around the fighting ground. His Fatality is where he dials a command on his arm, causing a giant Flying Saucer to appear, gooifiying his opponent. 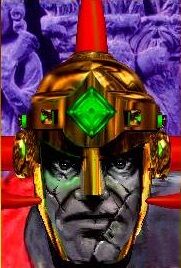 A ritualistic Statue that has been infused with a piece of Ore. The warshippers do not know that the Ore has life-giving powers and has turned their beloeved statue into a living stone God.

Tak's fighting style is similar to that of a pro wrestler, he can do back breaker and suplexes, he can also throw rocks at his opponents as well. His fatality has him pinning his opponent into the ground and him punting his opponent's head off of the body. Sound familiar, this Fatality would be used by Jax in Mortal Kombat R. 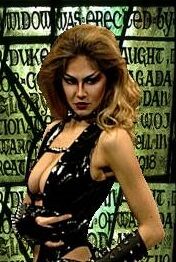 A witch fo the Black Arts, Pagan has found ncient scripts which tell the location of a piece of Ore. After finding that piece of Ore and has performed the spells to amplify it's power, she became a Goddess.

Her fighting style is similar to that of a Gymnist as she performs a lot of somersault moves, she can also summon skeletons to freeze her opponent in place and even teleport. Her fatality has her get out the head of Medusa that turns her opponent into stone and the head uses eye lasers to destroy to petrified her opponent. Though, use this Fatality on Tak and he'll make a juvenile gesture (as he's already made of stone), but the head will finish him nevertheless. 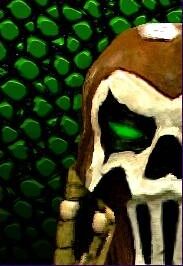 A powerful and feared Witch Doctor from Central America. Eventually, the villagers that were enslaved by him eventually tried to kill him, they burned him alive and dumped his body into a swamp, not knowing that the swamp contained a piece of ore which turned the dead Witch Doctor into a God.

Voodoo's fighting style is fast and lands many hits, he can even freeze his opponents by wrapping them with a snake. His Fatality has him take out a (of course) Voodoo Doll and he uses a short knife to kill his opponent by using the doll.

The game itself has been panned by gamers and critics alike, and one of the reasons for that is that it had very stiff character animation and clunky gameplay. Eventhough the game is in 3-D, the actual 3-D movement is limited. However, there are some people that would stick up for this game nevertheless, this is because the game was a testing ground for the "Zeus 3-D" game engine which would be used again for Mortal Kombat 4 which was faster and more flexible. The game's bosses (Grox and Exor) are also quite difficult to fight against, and it's not like the reward would be worth it either. No matter who you play as, the ending is always the same with your chosen character holding up a piece of Ore and telling you that there will be more War Gods to fight. Yes, that is a bit bothersome especially if you're expecting an individual ending for the characters. Well, at least there won't be a remake of this game anytime soon.

That is all I have for this blog page. Don't forget to check out my other wikis Johnny OTGS World and Johnny OTGS Movies, until next time this is Johnny OTGS signing out.