Hello again everybody and welcome to another edition of Johnny's Game Profile. Today,I would like to talk about a game that has been long forgotten, a game devloped by Rare (the same company that has made Donkey Kong Country, GoldenEye, Killer Instinct, Banjo-Kazooie and Perfect Dark). But before those games, they have made some games for the NES, this game is called Wizards & Warriors. Though, not a very memorable game, but did catch the hearts of many gamers for the time. 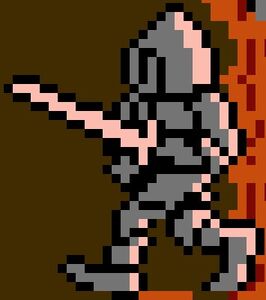 Kuros is the game series' main protagonist. Often clad in a suit of metallic armor (juts like in Medieval Europe) and using a sword. Kuros is considered one of the bravest warriors in the land.

The game series' main antagonist. Malkil has only one thing on his mind......you guessed it, world domination. Malkil is one of those recurring enemies that can take on any form, either an elemental energy or even a king.

The first game, Kuros has been called upon to defeat the evil Wizard Malkil as he has kidnapped several princess across the land. Kuros must rescue the princesses and infiltrate Malkil's castle of Ironspire and defeat the evil wizard.

The game itself relies somewhat on simplicity. Your objective in most of the stages you must traverse is collecting enough gems to proceed (ranging from 50, 100, or even 200 in some stages). Kuros can also collect keys to open certain chests which contain either gems, or other helpful items. Kuros can use his sword to attack and defeat enemies but he can also throw a dagger which acts like a boomerang to damage faraway enemies. Kuros can also use a shield which can deflect certain projectiles. Boots that will allow you to not only damage enemies, but also open chests without a key. You can also use magic wands to better attack distant enemies. There are also potions that will either make you run faster, jump higher and even render you invincible.The stages also have secret rooms where you can find gems and other good items to use.

Some time after Kuros defeats Malkil, Kuros is now known as one of the land's greatest warriors. But little does anybody know that Malkil was far from defeated. He has separated his center of power and split it into the 4 Terran elements (Wind, Water, Fire, Earth) and has invaded the kingdom of Sindarin. Kuros must travel to Sindarin and assemble the mythical "Iron Sword" to defeat Malkil.

This game in comparison to the first game is that there are a lot more variety of exploring. No more go around to find gems to proceed to the next segment of the stage. However, there is a catch, and that catch is that you must help out the animal kings of Sindarin and you must find a golden something of other (Egg, Fly, Crown and Tankard) to help out the kings. The game also uses magic (almost like in The Legend of Zelda) because in order to defeat the elements (the bosses) you must find the magic spell that will help you defeat them. The game also introduces shops (and with it money to buy stuff at these shops) you can buy keys, food and sometimes helpful items like more powerful swords, shields and helmets. You can also play some kind of "chance" game where you can gain more money to buy some of those items at the shops. Though, there are health restoring items such as chicken and even ale, but there is also the anti-power up which is the big chicken (that's right) it saps health from Kuros and stuns him for a few seconds.

As Kuros fights malkil on the top of the Ice-Fire Mountain, he thought he has vanquished the evil wizard. But, this was not to be. Malkil in his weakened state manages to defeat Kuros. The evil wizard then ventures to the kingdom of Piedup, where he has overthrown the king and passes himself off as the king. Kuros, ventures into the wilderness and he defeats a lowly monster and acquires a sword. As he reaches Piedup, Kuros knows one thing: defeat Malkil.

The game itself is basically like Metroid. There are no real stages, but rather one giant world open for exploring. Of course, the entire world isn't open to you from the outset. What you have to do is join several guilds (Thief, Knight and Sorcerer) and acquire new outfits and with them new abilities. Each outfit Kuros dons has their own abilities. The Knight outfit is mostly for combat as Kuros will either use a sword, or an Axe that is like a boomerang, and a long sword that shoots fireballs. The thief outfit has either a knife, a crowbar which allows access to buildings with windows, and a key which allows Kuros to enter doors without using a key. The Sorcerer outfit will allow Kuros to either shoot small energy balls, make him invulnerable to passing energy fields or even levitate.