Hello everybody and welcome to another edition of JohnnyTalk Games. In this edition we are going to talk about some of Capcom's licensed games. 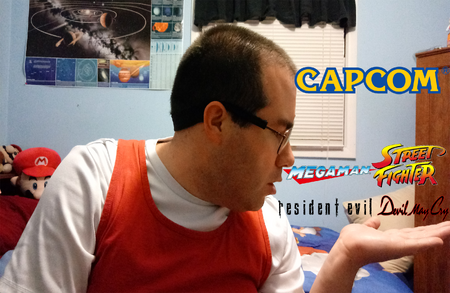 As many a gamer knows that Capcom has breeded some popular and great video game franchises which can match the popularity of Nintendo's game franchises. From Megaman to Street Fighter, from Resident Evil to Devil May Cry. 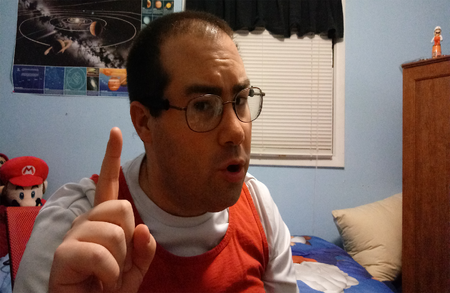 But you may not know is that Capcom was also given the license to do some other video games, some memorable, others.......forgetful. Let's take a look at them.

Based on the Canadian/American Comic Book which was titled Xenozoic Tales, supposedly in a distant future world where Humans and Dinosaurs co-exist. The game was made to tie-in to the TV Series which ran from 1993 to 1994. You play as either the 4 humans which are called "Machanics" (so-called freedom fighters) named Jack Tenrec, Hannah Dundee, Mustapha Cairo and Mess (possibly exclusive to the game). The game itself plays very similarly to Capcom's other famous beat-'em-up: Final Fight. Except that 4 players can play and when 2 or more players are playing they can use special moves that only can be performed when playing 2-4 players. There are also weapons where the players can use, but they can also use firearms as well as melee weapons as you fight against genetically enhanced Dinosaurs as well as humans and take on the evil Governor Fessenden at the end of the game. Most people that are familiar to the arcade beat-'em-ups would say that this is actually one of the better arcade beat-'em-ups. But if you look at it, it really is just a licensed Final Fight. Though, I would give it credit for not being just another "Jurassic Park meets Final Fight" gig (since the said movie came out at the same time as this game).

I have covered U/N. Squadron in previous JohnnyTalk Games Blogs. So......I'll do it again.

As You may know from my previous blogs that covered U.N. Squadron, it's based on the anime titled "Area 88" where a commercial airliner in training named Shin Kazama made a bet with a friend to join Area 88 (or U.N. Squadron in the USA) a mercenary pilot organization where people who join must collect $1,000,000 in order to leave. As Shin and fellow pilot Mickey Scymon soon discover that they must stop a mysterious but evil lan to take over thew world titled Project 4. There are 2 versions of this game. There is the Arcade version where you get to pick your favorite pilot, and you can pick your secondary weapon with the money you earn from each stage. It's a side scrolling shooter where you must manaeuver your jet fighter through a barrage of enemy fire as you shoot down the enemy, the bosses consider a missile lauching tank, a submarine, a battleship and (of course) Project 4. The Super NES version uses some forms of RPG elements as you must collect money to purchase more powerful jet fighters, along with facing some of the same bosses from the arcade game, you also face some bosses exclusive to the Super NES version such as the (infamous) cieling boss. The Super NES version of U.N. Squadron is considered one of the most difficult games on the Super NES, and it even has a code you can use which you can play on "Gamer" difficulty level, definitely not for the inexperienced nor is it for the faint of heart.

Once again, Capcom tried their hand to make a licensed beat-'em-up. This time, using the Aliens VS. Predator label.

In the near future, the Xenomorphs have reached Earth, and it's up to Androids trained as marines and 2 Yautjas to stop them.

Like in Cadillacs & Dinosaurs, there are 4 players you can choose from (and up to 3 players can play this game). The Androids are Linn Kurosawa (Supposdly Japanese as she uses a Katana as well as a pistol to fight, but is oncidered the "Guy" of the playable characters as she is fast but has low stopping power and requires a great deal of skill to use effectively). Dutch Schaefer (now, *NOT* to be confused with Arnold Schwarzenegger's character from the first Predator movie, but a nice Easter Egg nevertheless, is the strong but slow type) and 2 Yautjas who are very well balanced in speed and power. These 4 characters have to go through not just hordes of Xenos but also corrupt soldiers that work for Weyland-Yutani as well as they try to stop the Xeno Queen fromdestroying the Earth.

Based on the Japanese Manga written by Hirohiko Araki. JoJo's Bizarre Adventure also had some line of video games, but the one that was made by Capcom is the one that was a Tournament Fighting Game (TFG) that came out exclusively for Japanese Arcades in 1998.

Made by the same video game crew that made Street Fighter 3 and it's updates (Second Impact and Third Strike) it has some of the same dazzling sprite movement seen in SF3 and it even uses some of the move sequence from the Street Fighter series. It also features unique special moves for the characters.

There are a lot of great things about this licensed game, unfortunately this was a Japanese exclusive and was never given an official US release. 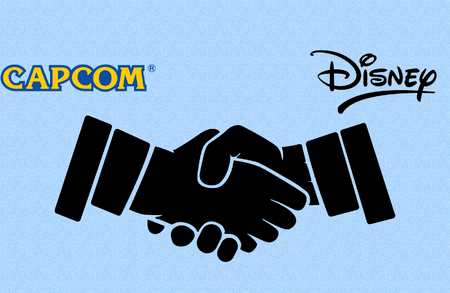 Beginning in the 1980's, Capcom was given some kind of pact which will allow Capcom to make Disney licensed games, some of them are pretty popular in themselves.

One of the Disney Licensed Capcom games was this, Mickey Mousecapades, this is where you play as the Mouse himself as well as his GF: Minnie. Both Mickey and Minnie shoot stars at their enemies as they try to make it through 5 stages (A Fun House, A Pirate Ship, The Ocean, a Forest and even a Castle). The Disney Mice are on a mission to rescue Alice from the Clutches of Malificent. Along with enemies that you must face in the stages, you also can find secrets where only reveal themselves when you shoot enough stars at them, some good like health restoring ckaes and ice cream cones to bad ones like crows which can take Minnie away, forcing you to find her before you can proceed. The bosses also come in the forms of Peg Leg Pete (from Steamboat Willie), Tick-Tock The Crocodile (From Peter Pan) Kaa The Snake (From The Jungle Book) and of course Maleficent. The game was also made in collaboration with Hudson Soft as you can (sometimes) find the Flying Honey Girl from Adventure Island.

Following the adventures of Scrooge McDuck (Donald's brother) along with his nephews Huey, Dewey and Louie and his trusted pilot Lunchpad for Scrooge's insatiable need for riches. He travels through the Amazon, Transylvania and even the Moon. Scrooge can also use his cane to knock away certain rocks and to climb vines and other objects, and he can use it a s apogo stick to attack certain enemies.

Unlike with Cadillacs & Dinosaurs, this does not tie in to the famous TV Show (which was airing at the time the game was released). Duck Tales is considered by some to be one of the best (if not *THE BEST*) licensed game ever created, let alone on the NES. The key to it's success, it was made by the "Megaman Team". That's right Keiji Inafune and his crew created this game and said by some to help with the success of the game. In fact, so successful is this game, they actually made a sequel.

Scrooge McDuck is at it again as he goes on yet another search for lost treasure to satisfy his love for money. Scrooge can use his cane for more things such as to activate switches or to turn mirrors around. He also goes around exotic places such as Niagara Falls, the castles of Northern Britain, The Pyramids of Egypt and even a lost island known as "MU".

Though it didn't reach the height of popularity as it's predecesor, but it was still good nonetheless.

Along with Duck Tales, Capcom decided to capitalize on yet another popular Disney Show: Chip & Dale's Rescue Rangers. You play as either adventurous Chipmunks as you can collect items and even pick up boxes to either throw at enemies or stack them to climb to higher places.

Again, they made a sequel to the game.

Both versions are based off the famous 1993 Animated Film which featured the now late comedian Robin Williams as the Genie. Based on the old Arabian story called "1001 Arabian Nights" It tells the tale of a "street-rat" named Aladdin who wishes for a better life. One day, he encounters the Princess Jasmine and immediately is smitten with her, and after helping a stranger get something from a place called The Cave of Wonders, he comes across a lamp which contains a wish granting Genie.But as his lamp was stolen by a scorcerer named Jaffar, Aaddin must find a way to get it back.

In the Super NES version, it does do a very good job interpreting the movie as you go through the Aggorabah's Marketplace, The Cave of Wonders and even do something outside the box by having Aladdin go into the Genie's Lamp and even a sand palace of some kind, it also had a "Whole New World" bonus stage where uou must collect as many gems as possible. Plus, you get a different ending if you collect all of the red gems. However, the game plays just like in Super Mario Bros. as Aladdin has to jump on platforms and even do somersaults on certain platforms and swing from rings as well, and collecting 100 gems gets Aladdin an extra life, and there are other bonus stages too you play with The Genie as you can geteither more extra lives or even an extension on your health as Aladdin can hold 10 hearts.

The Sega Genesis version focuses  more on action as Aladdin has a scimitar to fight with and defeat enemies, there are also bonus stages too and it also features stages not in the Super NES version such as the dungeon and even the Palace before Jaffar takes it over.

Just on a day of fishing for Goofy and his son, Max when their rivals Pete and PJ came ad kidnapped them via a Pirate Ship. Now, Goofy and Max must find a way home from the Pirate Island.

This is more of a Puzzle solving game than action, though Goofy and Max do use grappling hooks and they can kick blocks and throw barrels at enemies as well.

Well, that will do it for this edition of JohnnyTalk. Don't forget to check out my Movies and World wikis as well. Until next time, this is JohnnyOTGS Signing out.