Hello everybody and welcome to yet another edition of JohnnyTalk. Today, I would like to talk about video games that (chronologically) exist in the same world. There are different game series that exist in the same world, either it's because the games are made by the same developers or owned by the same company. Because this is about stand alone game series, do not expect crossover games such as The King of Fighters, Super Smash Bros. or any of the Street Fighter VS. games.

One of Capcom's most famed series actually take place in the same robotic world. Though, each of the game series takes place at least a century apart from each other and they don't physically appear side-by-side.

It all starts in the year 20XX with the original Megaman, and supposedly sometime between Megaman 6 and Megaman 7, Dr. Light begins his Repoid project and creates Megaman X but is in a capsule where he remained for nearly a century. In an alternate scenario, if Zero remains hidden, he is placed in a capsule for around a century (like his friend Megaman X), and then he is founded by a human resistance against a robotic empire, but then he sacrificed himself to save the human resistance team. It;ll be another 200 years until the Megaman ZX series begins as humans have the most advanced technology to merge that of the robots and with the same task: to champion the cause of humans and robots that want nothing more but peace. 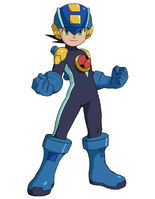 It isn't just the 4 aformentioned series that are connected in a timeline. Megaman Battle Network and Megaman Star Force are also connected, although they don't tie in to the previous 4 Megaman game series.

Megaman Battle Network takes place in 20XX (as in the original Megaman series) as Lan Hikari and his NewNavi: Megaman.EXE battle viruses that may to harm to the Network they swear to protect and the people that it effects. After the 6th game, Lan marries his friend: Mayl Sakurai and together, they set the stage for the world of Megaman Star Force (taken place 200 years after Battle Network) where humans colonized on many planets, the hero: Geo Stellar (not a very subtle name) uses his technology to transform into Megaman to defend the colonies from evil robotic aliens. 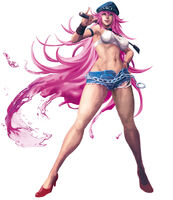 Fun Fact: One of the proposed titles for Final Fight was called Street Fighter '89 and it was originally going to be a sequel to the original Street Fighter game, but because the game is a side scrolling AFG (adventure fighting game) and doesn't want to dramatcially change the gameplay, they decided to make Final Fight a different game series.

The 2 famous TFGs for SNK made it onto this blog. Fatal Fury and Art of Fighting. It may not look like it at first, but these games do exist in the same world. Though, chronologically, Art of Fighting takes place around 15 years before Fatal Fury, as both games take place in the great fictional city of South Town, and yes Geese howard appears in both game franchises, though he is younger in the Art of Fighting games. The 2 franchises appear almost every year for the King of Fighters series of games, but because it appears in some kind of continuity, the story of the King of Fighters do not tir into the story of both Fatal Fury and Art of Fighting.

That is all I have for today on JohnnyTalk. Don't forget to check out my other blog series: Johnny's Game Profile where I talk about the details of some of the video game industries' lesser known video games. So long for now.