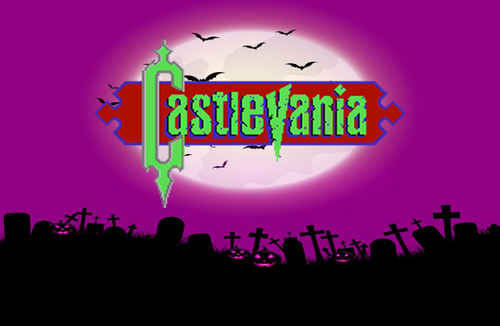 Hello everybody and welcome to another special edition of Johnny Watches Youtube.

As you all know, that Halloween is just a week away. For some, Halloween means masquerading as their favorite characters, trick or treating, eating sweet sweet candy, and carving Pumpkins into funny or scary Jack O' Lanterns.

For me, it means watching one of my personal favorite video game franchises all October long: Castlevania.

Castlevania is basically themed with Halloween (eventhough it wasn't created for that purpose) as you face, Ghosts, Monsters (such as Frankenstein and werewolves) and (of course) Vampires.

Without further ado, here is my personal favorite Castlevania games.

I'll start off with my most favorite Castlevania game.

Taking place around 7 years after the events of Castlevania, Simon Belmont (now known as a hero for defeating Count Dracula) has suffered wounds from his battle with Dracula, now he is feeling deathly ill from his wounds and realizes that it's a curse placed on Dracula and will eventually kill Simon if he doesn't fully eliminate Dracula. Simon now must venture throughout Transylvania to find the body parts of Dracula (his Ribs, his Heart, his Nail, his Eye and his ring) and take them back his castle and burn them.

The real reason why this is my personal favorite Castlevania game, is because of the wide things to do and items to use, and it also gives you a good and overall fun challenge, it isn't going to just give up and it won't make you frustrated either. Simon also uses a wide variety of weapons (some unique to the game), he buys a variety of whips which increase in stopping power and he can also use different sub-weapons such as a diamond and a variety of knives. The Body Parts of Dracula aren't just key items either, each give Simon their own abilities such as the ability to reflect small fireballs, see hidden items and even break weak blocks too.

The game also ends differently depending on how long it took you to beat the game, it tells you if Simon is successful in his jurney to destroy the curse placed upon him by Dracula, or not.

Castlevania: Symphony of The Night

After the events of Dracula X, Richter has vanished soon after his defeat of Dracula. Sensing an imbalance of power, Dracula's illegitimate son: Alucard heads toward the Castle. What he will soon realize that nothing is all it seems.

Arguably the most popular Castlevania game ever created, and rightly so and it also launched the "MetroidVania" series of games. This game had a lot of variety than your average Castlevania game, Alucard can use a lot of weapons and even a wide variety of capes and shields as well as items, Alucard can also gain special abilities like turning into a wolf, a bat or even a cloud of mist (like dear ol' daddy), there's also a lot to explore (that may not sound right since you only traverse Dracula's Castle in this game).

The game also has multiple endings, and depending on what you use during the battle against Richter will determine on what ending you get, the game can also continue as well under the right conditions.

Taking place around 12 years after the events of Castlevania: The Adventure. Christopher Belmont was preparing for a ceremony for his son: Soleiyu to take the reigns of Vampire Hunter and entrust the Vampire Killer whip to him, until he suddenly disappeared on the night before the ceremony, at the same time, 4 castles suddenly appeared from the ground. Christopher must destroy these castles and find Soleiyu.

A major improvement over the first Game Boy installment, though the animation is still a bit slow, but it goes a bit faster and it even has new features. Christopher can now use Sub-Wapons and he can use his whip while climbing on ropes.

An updated version of the original game where Simon Belmont must silence Dracula.

It's an updated version indeed as Simon can whip in many different directions, giving an all-around great advantage to the whip abilities and increases the survivability. The game itself also has some very dynamic environments especially going through a spinning corridor and swinging Chandeliers.

Taking place 7 years before the events of the first Castlevania for the Nintendo 64, this follows the tale of Cornell (Blue Crescent Moon) who is a man-beast who has powers to turn into a wolf at will. His sister, Ada has been kidnapped by the creaturs of the night and Cornell must rescue her.

I only played the Nintendo 64 version of this game, but what this game brings is not so much the same game as it introduces not only new characters, but also new stages as well as new layouts to some of the previous ones. What I like about both versions are the wide variety of items to use. The characters can use health restoring items such as chicken and roast beef as well as using items that can cure status ailments such as Poison or Vampirism as well as card that can make time go forward.

Taking place in 1944 with World War 2 raging and millions dead. Many fear the resurrection of Dracula. A Demon named Brauner has made Dracula's Castle reappear, and the Church as summoned 2 people: A man named Jonathan Morris who is the son of John Morris (from Castlevania Bloodlines) and a woman named Charlotte Aulin a scorceress in training.

I haven't played this game, but this is one of the better "MetroidVania" games from the IGA era as it focuses on 2 different styles which you must master. Jonathan is the classic style where he uses Whips, Swords and other melee weapons and Charlotte is the magical style as she uses spells to attack enemies. Players must master both in order to get far into the game.

Well, that is it for this edition, don't forget to check out my Movies and World wikis. Until next time this is JohnyOTGS signing out, and have a Happy Halloween.