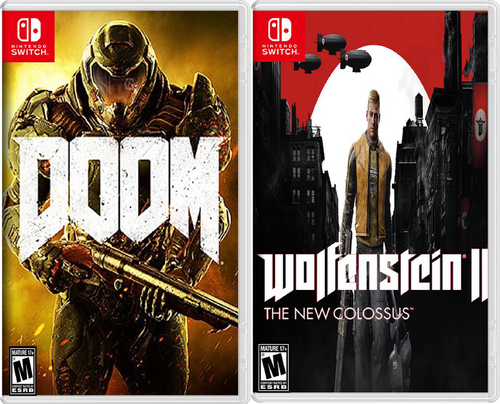 Hello everybody and welcome to another edition of Johnny Watches Youtube. Today I'm going to talk about the last time the M rated shooters Doom and Wolfenstein apeared on a Nintendo Gaming Platform.

Recently, Nintendo has released a Nintendo Direct (a video which Nintendo mentions new upcoming games as wll as other nintendo related news) has officially announced that Bethesda will release it's games (from id Software) Doom (which came out last year) and Wolfenstein 2: The New Colossus (which will come out for Playstation 4, X-Box One and PC on October 27) for the Nintendo Switch.

Now, the last time that Wolfenstein was on a Nintendo Gaming Platform was the Super NES (Wolfenstein 3-D)

The Super NES version of Wolfenstein 3-D is slightly different from the original PC. Now BJ Blazkowicz' missions are also slightly different as he takes on fewer stages (and they're layed out very differently). BJ also uses more weapons, apart from the knife, the pistol, the assault rifle, and the Chain Gun, he can also use a Flame Thrower and a Bazooka (which do more damage). Like in the original game, BJ can also find secret levels where a lot of goodies (like new eapons and even gold items) can be found. It also uses an "item" system where it's like collecting coins in Super Mario Bros. if BJ collects a certain amount of these gold items he gets an extra life. There are also more bosses to fight, apart from Hans Grosse and Dr. Schabbs, BJ also fights Trans Grosse and the Ubermutant (both from Spear of Destiny).

Though, the game has some obvious problems, it runs slightly slower than the original PC version, and ther snimation is quite choppy (making it next to impossible to make out enemies from a distance). But perhaps it's biggest problem is that it was "heavily" censored. The blood is removed (the enemies don't bleed blood, but apss up either sweat or spit). All depictions of Nazism were removed from this game (even the mentioning of Nazi Germany was removed as it's renamed the "Master State") even the final boss (supposedly Adolf Hitler) was redone to remove Hitler's iconic (or infamous) mustache and the Swastika from his upper left sleeve of his Beige Suit, and he is even re-named the "Staat meister", there are also religious depictions that were removed, such as the cross gold item which you find in some secret areas are removed and replaced with a Sceptor (which a King or Queen would hold). The enemies also don't speak German, when they see you they speak English (either "Stop" or "Halt").

I never played this game (I wanted to) but never got the chance. But the same isn't said about the next game mentioned.

The story and layout of the Super NES version of Doom remains about the same as it was in the original PC version. Though some levels didn't make it into the game, it still feels like the original.

Though, I have to say not quite. The game runs on a much lower frame rate (possibly due to the smaller bit size of the Super NES games). Doomguy's face doesn't grimmace or turn when he get's hit, making it difficult to know where to shoot, and just like in the Super NES version of Wolfenstein the animation is a bit choppy (but not as bad is in the Super NES version of Wolfenstein). But, Doom pretty much escapes the "Nintendo Censoring treatment" as Doomguy and the enemies all bleed red blood

Though, Doom would return on the Gameboy Advance. The First Doom game is hardly a good port of the actual game. Unlike the Super NES version, the red blood is removed (as the enemies bleed green blood instead and Doomguy's face doesn't bleed at all), there are some new levels (exclusive to the GBA version) as well as some re-done levels (possibly to fit the bit size of the GBA), but only the Military Base secret level is in the game. The Cyberdemon and The Spider Mastermind aren't in this version.

Doom2 for the GBA is (what I call) a *major* improvement over the first GBA version. The layout of most of the levels are exactly the same as in the original PC version, all of the enemies made it to the game and it also had a better version of the game's soundtrack. Though, the red blood is still removed and the Wolfenstein secret levels didn't make it, but these omissions are only minor.

Well, that is all I have for this edition. Don't forget to check out my other blog pages as well as my Movies and World wikis. Until next time, this is JohnnyOTGS signing out