Hello again, and welcome to another edition of Johnny Watches Yotube. Today, we are going to talk about some of the games taken place in the Old West. This is a classic, it's called Gun.Smoke 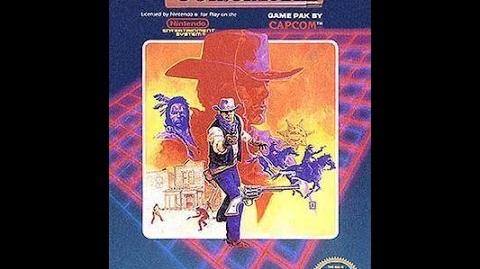 Taken place in the mid 19th century during the western gold rush, a band of theives known as the Wingates have harassed the citizens of a town called Hicksville. Only one man can stop them, a man named Billy Bob.

Not to be confused with the western radio show and TV show of the same name. This is based on the arcade where it's a forward scrolling rail shooter where you shoot ad defeat a series of enemies as you face a boss in each stage, there are 6 stages in all. You move, and the A and B buttons control on which direction you shoot. A is left, B is right and both simultaneously will shoot straight. Apart from enemies, you can also shoot barrels and (more than likely) will contain a power-up. There are rifles which increase the range of your bullets, boots which increase your movement speed, invincibility which renders you.........well, invincible, and an extra life (which is self explanitory), there is also a horse which can absorb 2 shots from enemies and an anti-power up: the Yak-Skull which decreases your bullet range and movement speed. Unlike in the arcade version, you can use different weapons such as a shot gun which can shoot 5 shots in a crescent shape trajectory, a rapid firing machine gun and magnum bullets which can penatrate enemies and other objects. In each stage, you need to find a wanted poster in order to face the boss, and there are 6 unique bosses in all.

The first boss you'll face. He uses a single shot rifle and gets in his belly every time he takes damage, he has a $10,000 bounty which you'll collect once you defeat him. The Town of Hicksville is a archetypal Western Town where it can also have people shooting at you from the buildings.

The second boss that uses Razor Sharp Boomerangs (a later reference in Megaman X) and jumps to avoid your shots, this guy has a $12,000 bounty. The boulders is like a wide open space desert, (typical for the Old West scene).

You cant have an Old West themed gme without expressing homage to the animosity between Cowboys and Native Americans. Devil Hawk (like Cutter) jumps around but instead of throwing boomerangs, he throws blue colored fireballs at you. He has a $25,000 bounty. His village (Comanchi Village) has teepees where minor Naitve American enemies can jump out of, and some of these minor Native American enemies can throw either Tomahawks or even shoot arrows at you.

Japan's finest warriors somehow make their way to America during the mid 19th century, like Cutter and Devil Hawk the Ninja can jump around and throw 3 Shuriken (ninja stars) at you. But he can also disappear and re-appear anywhere, making him a difficult boss, he has a $20,000 bounty. Death Mountain (not to be confused with Hyrule's famous locale) has falling boulders which you need to avoid, minor Ninja enemies and even snipers that appear from the small caves.

A break from the other bosses as he is slow and doesn't jump as well, he uses a "Bomb Gun" which have a wide radius of attack. He has a $20,000 bounty. The Cheyenne River has watery areas (which you can traverse) and even tress, making some items inside barrels hard to reach.

The leader of the gang of thieves. He uses a machine gun which can make avoiding to get hit very difficult. There are 2 Wingates, and both must be defeated in order to win. He has a $30,000 bounty. His base: Fort Wingate is basically like the Town of Hicksville, it'll have snipers hiding in windows in some buildings, and some items will be surrounded by Headstones on graves, making them hard to reach.

That is all for today, now don';t forget about my other Blog page: JohnnyTalk hwere I talk about some strange and unusual things about our favorite video games. You can also check out my other Wikis: JohnnyOTGS Movies and JohnnyOTGS World, until then this is JohnnyOTGS signing out.