This page contains the oddities, rumers, and mysteries that I have heard from over the years of my video game experience. Some of them were well kept mysteries and rumors about certain video game characters spreading bad propaganda and some oddities that we still continue to marvel at even today. 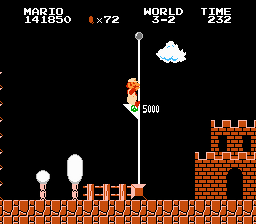 When the first Super Mario Bros. game came out (and if you already guessed), at the end of each stage, Mario hangs himself on a flag pole bringing down a white triangular flag with a green skull symbol on it (the higher you're on the pole, the more points you'll get maybe even an extra life) and he enters the small castle and a white square flag with a red star on it is raised at the castle's top. Because of the small detail for the graphics at the time, the green skull looked a lot like the "Hippie Peace Sign", and the red star on the castle flag was a symbol of communism. So for a while, some gamers (and some other people as well) thought that everybody's favorite plumber was a supporter of communism. Of course, this rumor was quickly put to rest as communism in Russia dissolved not long after Mario's rise to fame.

During the adventure in Zelda 2 for the NES. You'll come across a man in a town that calls himself "Error". As funny as it may sound, this is *NOT* an Error by the writers of the game. Further in the game one of the people in the town of Mido will ask for Error and once you come back to him, he'll tell you the location of the King's Tomb which will lead you to the 3rd Palace. 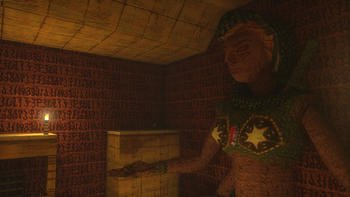 In the Spirit Temple, you'll come across a giant female statue. But if you really figure it out, you'll discover that the grating inside the head of the statue isn't the only thing that you can hook onto with the Longshot (as you'll have at this point in the game). If you aim the Longshot at the statue's breasts, you can actually retract to either oe you aimed at. however, the reason why this isn't in the omission catagory is because it *isn't* omitted from overseas versions of the game (as it is usually with added extras like this which are only in Japanese version of games). More interestingly, is that this oddity remains in all versions of the game when it was re-released. Even the Nintendo 3-DS remake has this oddity. 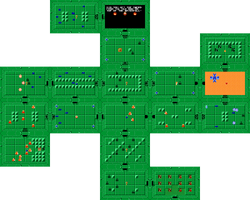 In the early times of The Legend of Zelda, the developers even threw in some surprising (but unknowingly upsetting) things in their games. The third dungeon (Level 3) looks like the Swastika which was used by the German Nazi party from their rise to power in Germany in 1934 to their eventual defeat in the European Theater of World War 2 in 1945. In reality, it's actually the religious Manji symbol which is said by many religions to bring good fortune. This symbol has a history dating back several thousand years and used by many of the world's more notable and the oldest religions (including Christianity and Buddhism). 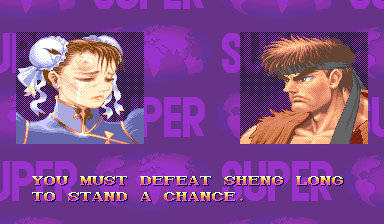 Once Street Fighter 2 hit arcades in the early 1990's, it became an instant favorite to aracade gamers virtually worldwide. However, there was something enigmatic about the game. When Ryu triumphs over his opponent he says to his defeated opponent that he must defeat Sheng Long in order to have a chance against him. Now, with this you might ask "Who is Sheng Long?" Well, in the early times of the game (as it was released in the U.S.) no real explaination was given, making American fans of the game assume that Sheng Long is Ryu and Ken's master. The real logic behind Sheng Long is that it was cuased by a misprint when localizing the game. In the Japanese version of the game, Ryu actually says (roughty translated) "If you can not overcome my Rising Dragon Fist, you can not win." Now Rising Dragon Fist in Japanese means "Sho-Ryu-Ken", so when the name was being translated, it was misprinted by bad translation (ironically, the Super NES ports of the game where the only English versions that had Ryu's quotation correct). Capcom answered back by going deeper into Ryu's past and saying that his master was named Gouken (who is also Akuma's brother), though he supposedly *died* by Akuma's hands in the events of Street Fighter Alpha, but came back in Street Fighter 4. This mystery however will live forever as being one of the longest and one of the most interesting of video game mysteries.

Furthermore, in an April Fool's edition of a video game magazine called Electronic Gaming Monthly has printed one time on how you can fight against Sheng Long in the arcade version of Street Fighter 2 (by going through the game without losing a single round) and Sheng Long replaces M.Bison as the final boss and has the same move set as Ryu and Ken. This caught the eyes and ears of Capcom, and instead of taking legal action against EGM, it gives them not just one but several ideas. One idea of replacing M.Bison with another character was used in Super Street Fighter 2 Turbo in the form of Akuma (by going through the game without losing a single round when you face Bison) with an advanced move set of Ryu and Ken, and only the best of Street Fighter gamers have defeated this self proclaimed "Master of the Fist". Capcom also used the look of Sheng Long (he looks like an old fighter with long whits hair, a beard and a sleeveless gi that is black as opposed to Ryu's white gi and Ken's red gi) for the look of Gouken for Street Fighter 4. 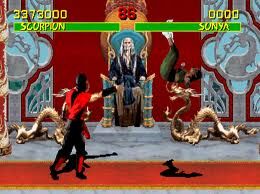 Mortal Kombat is very well known for their secret characters that gamers didn't know about until they played the game under certain conditions. However, this article isn't going to mention Reptile. It isn't going to mention Smoke, Jade or Noob Saibot. For some gamers, they have used a special hacking device to play Mortal Kombat so to play the game and complete it easily. Interestingly, what these gaming hackers have also discovered in the arcade game's menu is something called Ermac (this is shortened for a computer term: "Error Macro"). Some gamers that hacked the game have even seen a red colored ninja fighting and these gamers seeing this have named the red ninja Ermac. In reality, this was just a beta test player (as the MA Daniel Pesina was wearing a red ninja suit and then have the costume re-colored during other parts of development) and didn't become an official character until Ultimate Mortal kombat 3. Interestingly, this has happened again during development of Mortal Kombat 2 as gamers that hacked into the game have discovered another red ninja (only this time, it's female) with no official name given, gamers called her Skarlet. Again, it was a beta character due to MA Katalin Zamiar's red colored costume. Skarlet didn't see an official appearance until Mortal Kombat R as a DLC character. 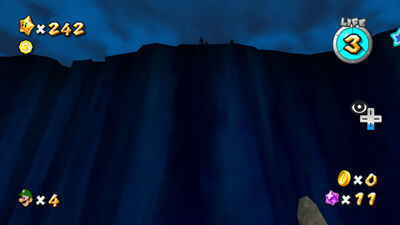 In the Shiverburn Galaxy in Super Mario Galaxy 2, you can see 3 alien-like figures on the top of the hills (look at the top/center part of the picture above). As you traverse through Shuverburn Galaxy and even make it to the final boss, you'll notice that these mysterious figures on top of the hills are *still* there (as if they're following you). Thios baffled many gamers and wonder what these figures are *really* are. No matter how hard they tried, even hacking into the game, they can't reach these 3 figures. So, this mystery will remain a mystery until Nintendo mentions about them. 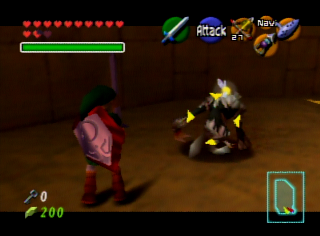 The first release of the game featured a Cressent Moon with a star for the symbol of the Gerudo, because the Gerudo are mostly referenced by the middle east. Plus, the original Fire Temple BGM featured a chant from middle east men. Unfortunately, it somehow brought controversy among the Islamic community (most considering it insulting). So, in the game's re-release for the Nintendo 64 (this also includes re-releases for the Gamecube, Wii Virtual Console and The Legend of Zelda: Ocarina of Time 3-D for the Nintendo 3-DS) had Islamic references omitted (with a new symbol for the Gerudo and altered BGM for the Fire Temple).

Personally, this doesn't make sense to me. Now, I'm not Islamic but even if I was I wouldn't consider it insulting because Nintendo were clearly not using the Islamic references in a bad way. 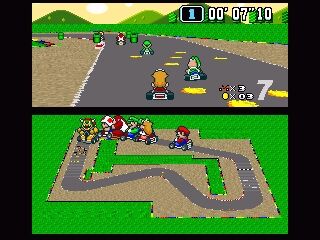 You might actually find it difficult to believe this, but even some Super Mario Bros. games had stuff that was inappropriate. The Japanese version of Super Mario Kart had some of this, in the Japanese version if you win a cup race with either Bowser or Peach, they'll celebrate by actually drinking from the Champagne bottle. This is a tradition in many real life race events (e.g., NASCAR), but because this is a game geared towards children, Nintendo changed Bowser and Peach's win pose in the overseas version of Super Mario Kart. 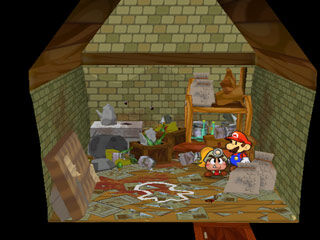 In the Japanese version of Paper Mario: The Thousand Year Door in one of the small houses in Rogueport you'll see what looks like a murder scene with a chalk lineout of a toad with dry blood on the floor. Once again, because Super Mario Bros. games are geared for children, this scene was omitted.

During link's time on Koholint Island, he meets up with a Mermaid in Martha's Bay and said that an important accessory was taken from her by the waves. In the American version of the game, it's a Necklace. But you may not know that the Mermaid's accessory in the Japanese version as well as early European Versions of Link's Awakening was a bra. Because the bra being in a game geared for all ages (like Super Mario Bros.) this was considered inappropriate and when Link's Awakening DX was released in Europe, the bra was replaced by the Necklace.

Retrieved from "https://johnnyotgs.fandom.com/wiki/Video_game_Rumors,_Oddities_%26_Mysteries?oldid=6951"
Community content is available under CC-BY-SA unless otherwise noted.