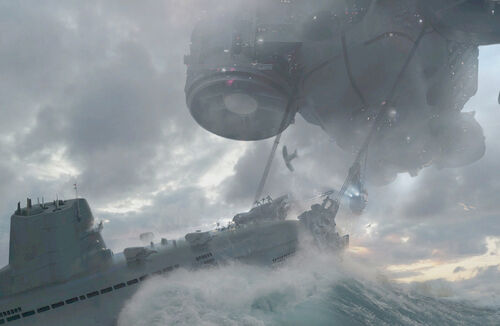 After BJ defeats Deathshead, he is terribly injured with his entrails showing. As Set cuts out BJ's intestines, he slips into a coma that would last 5 months. During this time, he reminisces his time when he was a kid with his caring mother (Zofia) and his abusive father (Rip). But as BJ awakens, he realizes that he is paralyzed, on top of that the Eva's Hammer is under attack by Frau Engel's elite Nazi unit. Crippled or not, BJ must save the sub as well as the Kreisau Circle. 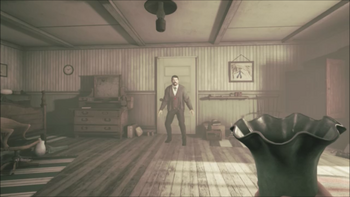 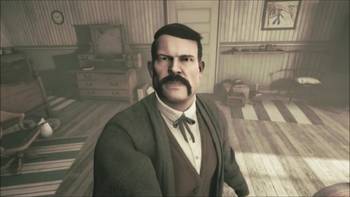 After choosing which timeline you want to go down, there will be a series of cutscenes where BJ slips in and out of a coma. The first action segment is when BJ (as a kid) is put into a closet by his mother to protect him from his father, but after an agrement bwteen BJ's parents, Rip will eventually knock out Zofia and throw out their Dog: Bessie, and he will turn to BJ. There are 3 vases which you can throw at Rip, no matter if you use just one or all 3, they'll have no effect in defeating Rip, after hitting him with the second vase, he'll go over and grab BJ by the neck and choke him until he loses consciousness. The scene will then go to BJ coming (somewhat) out of his coma where Caroline and Anya were consoling him, and then the scene goes back to Rip where he ties BJ's hands to a Horse saw and puts a shotgun in his tied up hands and tells BJ to shoot Bessie. 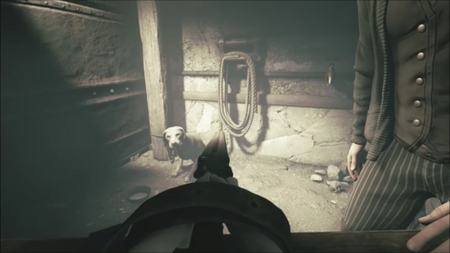 Assuming that you are a good natured person, you wouldn't want to shoot and kill Bessie, and not doing so would just make Rip angry (and for good reason) and he'll shoot Bessie for BJ. The scene will then go to BJ and Zofia who mourn the loss of Bessie. 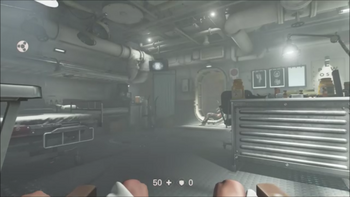 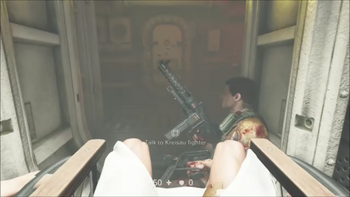 The scene will then go to BJ finally awaken from his coma, but realizes that his body is crippled and must get himself to a wheelchair (which is the handicap for this stage) Go to the Kreisau Circle fighter at the nearby doorway, after talking to him he'll give you one of his weapons which you'll need to fight the invading Nazis. 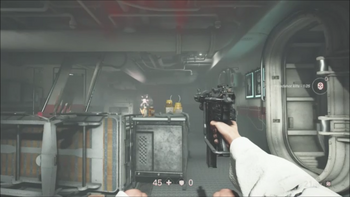 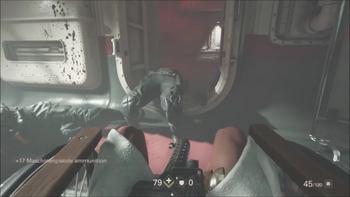 After the Kreisau Circle member dies, shoot any Nazi that gets in your way. Once it's done go through the next doorway. 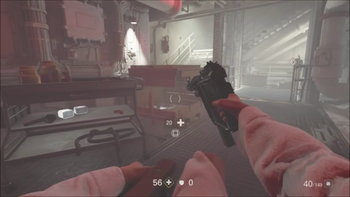 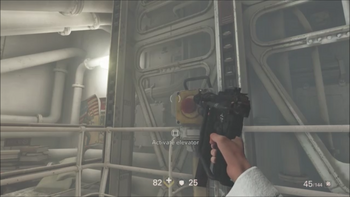 In the next doorway, and if you can spend the ammo, open the nearby crate as it has a Light Armor Vest, which will definitely help you. After that, head for the lift which should be straight ahead. 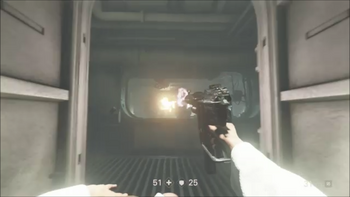 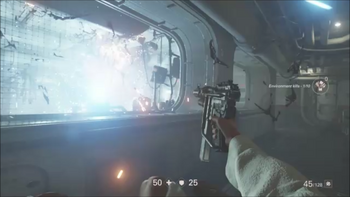 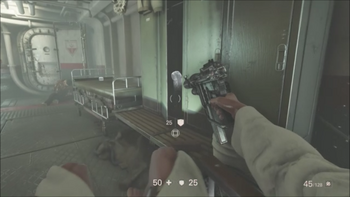 At the top of the lift, head to your left and you'll see Nazi soldiers on the other side of the window in the next room, the glass is bulletproof so you can't shoot the Nazis and vice versa, but as they say to go around, you'll see that they'll explode. Before going around the window, one of the lockers has a light armor vest, pick it up and then proceed. 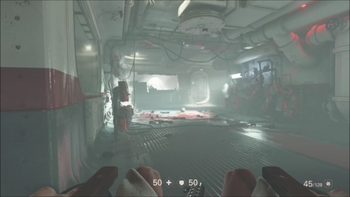 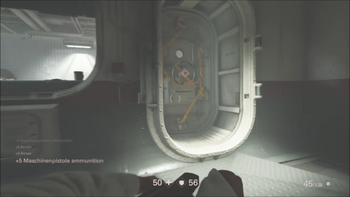 Set Roth will tell you to stop, because of the trap you see before you (and the same trap that killed the Nazis you've seen a few minutes ago). He'll turn them off so you can come towards Seth. Once he has told you it's safe head to the door on your right. This will trigger a cutscene where Set will tell BJ about his crippled body, and what is happening to the Eva's Hammer and where Anya is. BJ tells Set to point him to the direction of the Platform Elevator, Set will give BJ a map to where Sets traps (Microwave inhibitors) are. 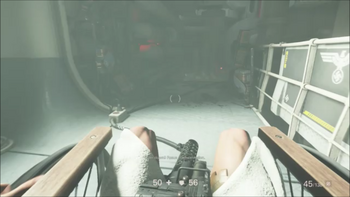 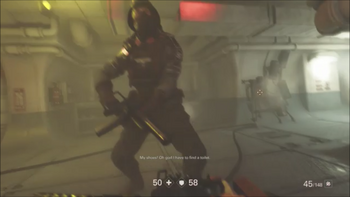 After heading out. Go down the stairs which you should see right in front of you. Use Set's Microwave Inhibitor Traps if necessary, but just as Anya says, make sure you turn one off so you don't kill yourself. Then proceed to the left. 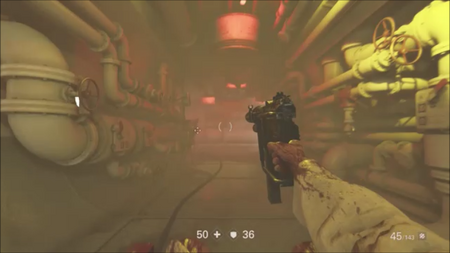 After heading to thew left side of the corridor, head right. 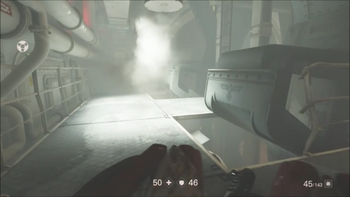 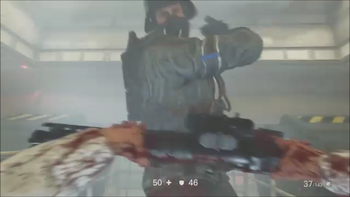 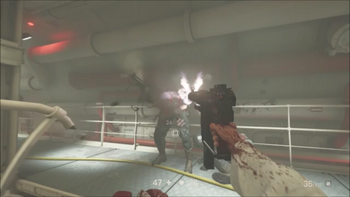 After heading right, you'll come to a strange gear-like object. Take that as it'll lead you to another part of the area, eliminate any Nazi that you see. After dealing with any enemy you see. Head left. 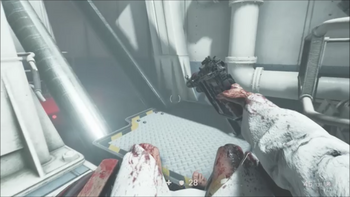 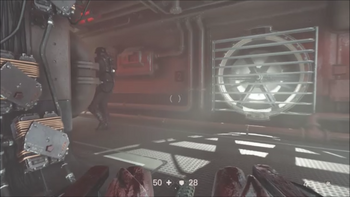 You'll come to 2 giant pumps that have platforms on them. You can take either the left or the right, but be sure that there are Nazis on the top and eliminate them if you have to. Then head right, you should head to some kind of pipe room which is full of enemies, eliminate them and head to the door on the far side of the room. 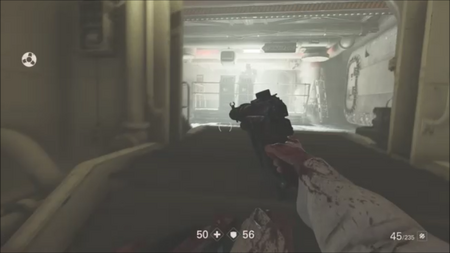 After the pipe room, there should be stairs which lead down to a conveyor belt, follow the conveyor belt until you come up close to the platform elevator. A Nazi will reverse the belt so you can't climb up (and this will also make BJ fall out of his wheelchair). 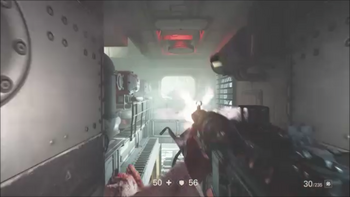 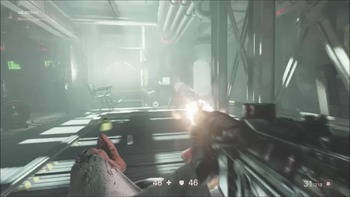 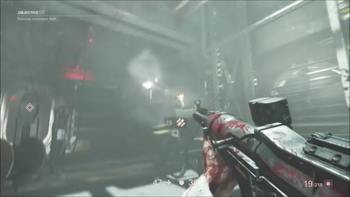 Eliminate any enemy that you see so you can get back in the wheelchair. 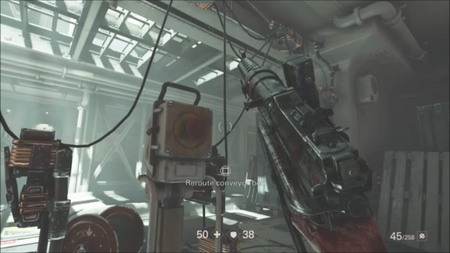 After dealing with the Nazis and are back in the wheelchair, head right and you should see a button which will turn the conveyor belt back to it's original course. After that, take the conveyor belt all the way up (eliminating Nazis when you see them) and then head left. 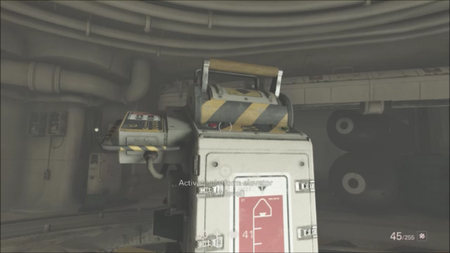 You'll then arrive to the controls which are for the platform elevator.

Retrieved from "https://johnnyotgs.fandom.com/wiki/WOLF_2~Epsidoe_1-1:_Eva%27s_Hammer?oldid=10461"
Community content is available under CC-BY-SA unless otherwise noted.