You'll face all kinds of Nazis in this game, they can range from being easy to quite hard, and sometimes a lot of them will just crowd you and fire. So make sure you use the right weapon when you face them.

These are the basic kind of soldier you'll face in the game. They're usually armed with Assault Rifles and use some of the more basic tactics to shoot. Sometimes, they'll throw grenades, especially if you're using cover. 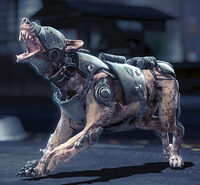 The Nazis use well trained dogs as scouts. These enemies can sniff you out if you're trying to sneak your way through a certain area. Eliminating them silently is the best policy when you see one. While fighting however, use a distant weapon since Kamphunds can't fight from a distance, but are fast enough to close the gap between itself and you very quickly.

These guys are only armed with pistols, but once they notice your presence, they'll call for reinforcements, and will continue to do so until he's dead. Like the Kamphund, eliminating them silently is your best bet, especially if you're low on ammo, health, armor or perhaps all 3.

If you unlock a perk that allows you to know if there's a CO in the area, a grey symbol that says "Signal Detected" will appear on the upper right corner of the screen. Be mindful that there can be as many as 3 COs in one area.

A more dangerous enemy. These guys are armed with Schockhammers and wear a heavy duty armored suit, making them invulnerable to pistol bullets (even to the head). They're dangerous to fight up close, but they're vulnerable to the (inronically) Schockhammer, but a headshot from the Bombenschus will also eliminate them good.

These enemies are armed with a Bombenschus, and they're dangerous at range. But their weakness is obvious, they use these weapons even if they're fighting up close, so a close quarter rapid firing weapon will do them in. Of course, you can also use a Bombenschus to eliminate one from a distance. 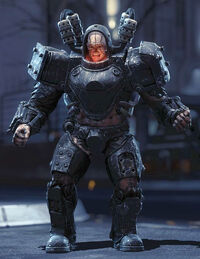 A definite force to be reckoned with, they have nearly invincible armor and are armed with heavy machine guns. The first Ubersoldats you'll face will be wired by a cable which is connected to some powering device above them (much like bumper cars) and are powered by a nearby generator, turn off the generator to subdue the Ubersoldat and eliminate them.

However, as you progress through the game, you'll face ones that aren't attached to a cable, these kind of Ubersoldats you'll have to aim for the electrical units which is on both sides of it's head and as it's stunned, take off the metal plating that's on it's heart and then aim for the exposed heart. 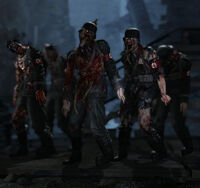 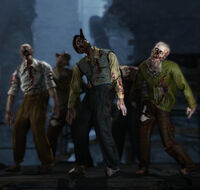 New enemies you'll face at nearly the end of the game. These enemies aren't very dangerous by themselves as they'll take time to attack you and most attack you up close (though some Nazi shamblers are armed with assault rifles). But they can be dangerous in large numbers (and most of the time there are). The Schockhammer is the best weapon against them (the Kamfpistol will also work on them).

Retrieved from "https://johnnyotgs.fandom.com/wiki/WTOB:_Enemies?oldid=8430"
Community content is available under CC-BY-SA unless otherwise noted.